As much of a sucker as I am for films about giant-sized animals terrorizing human beings, The Food of the Gods is not one I've had the 'pleasure' of experiencing until recently, when the ladyfriend and I were in the mood for something a bit of awful to counteract the seriousness of our daily lives. It's a 70s piece based on a 1904 H.G. Wells novel that, despite its cautionary implications, has never been one of his most famous works, but nonetheless was ahead of its time if you take into account the thousands of environmental backlash science fiction stories and films that have since manifest due to the social conscience and political protest. When I say 'based on', I meant that in the loosest of terms, because it transplants a tiny bit of the tale into modern (70s) times, which is honestly part of why the film's plot falls to pieces in very short order...

This Food of the Gods is no Godzilla, so instead of mankind's destruction arriving in the form of a massive radioactive lizard due to nuclear testing, it gently bubbles up from the earth like a great bowl of curds 'n' whey, on a not so remote British Columbian island which we are given very little other information about. Directly on the property of a pair of the dumbest elderly folk you might ever see in a film, Mr. and Mrs. Skinner, one of whom has raced off on the local ferry to try and find more information and possibly profit from the discover. For, you see, ingestion of the 'F.O.T.G.' by young animals causes them to grow up to astounding heights, and through the film we see some cheesy transparent wasps (who solidify to a plastic like composition when they're actually on the body of an actor), rooster and chickens (somehow being kept in the Skinners' small barn), grub worms (I think in the original there were earwigs), and of course, the fucking rats, which are truly the stars of this piece, if there are any.

Onto this scene busts a pregnant couple, a trio of football guys (reduced to a 'pair' fairly early on), and a businessman who wants to exploit Mr. Skinner's discovery, not to mention his lovely assistant who is of course to be set up with the lead jock. I recognized a few of the actors, like Marjoe Gortner who was also in the awful sci-fi epic Starcrash as the lead, Ida Lupino as Mrs. Skinner, and Ralph Meeker of The Dirty Dozen and Kiss Me Deadly, but this was hardly a gathering of star power. Of course, being an archaic horror movie, most of the characters act completely irrational through the film, making terrible mistakes and not seeing the obvious 'writing on the wall', that their lives are in fucking danger from fucking giant fucking animals! Seriously, people, one WHIFF of a giant rooster, or a wasp turning my friend into a swollen bag of bruised skin and pus, and I am the hell out of this place, forever. I'll get the army, I'll get the mounties, or whatever those Canadians use to protect themselves. No way in hell am I keeping some in my barn, or leaving my elderly wife behind in a forest full of giant wasps and rats being led by a menacing albino...

And yet, there are many situations throughout this film that could just have been avoided with a little common sense. For example, in one scene, the jocks pull up in their nifty jeep to help out the pregnant couple, whose RV has been left stranded in a ditch on the road; they offer to take them along, but even though the couple has mentioned they saw something strange already, the guy decides the jocks can just pick them up on the way back. Really! He leaves himself and his very pregnant woman right in danger's path, and sure enough, the rats come along eventually (but I'll say no more). The lead football guy Morgan actually attempts to fight off the giant hordes of rats, and succeeds, thanks to his strangely MacGuyver like practicality and knowledge of guns, jury-rigged explosives, electrified fences (he's got a portable generator in the jeep) and how to blow up a dam...which leads me to the stupidest part of The Food of the Gods, its 'climax'... 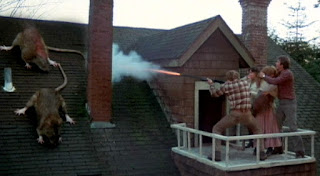 So throughout the film, the giant rats and other animal effects are achieved through a mix of tricky camera work presenting real film of rats imposed against the actors, and various models (like the Skinner's house in the final showdown, clearly a model/dollhouse tot he point its distracting). During close-ups of biting and killing, they're represented by what look like giant animatronic heads...pretty cool, actually. Once in awhile there is some degree of pathos when they're dragging down a dude and biting him to death, and in truth the rat actors handle this film like champs. Numerous rodents get shot with what seems to be air guns or paint balls of tomato paste or ketchup, and they go hurtling through the air. As lame and obvious as it seems, it's pretty darn fun. These things earned someone a paycheck for good reason. But then, in order to finish the fight, Morgan goes and blows up a damn. Yes, on a small island, which looks to have little other water than a few small ponds, there is suddenly this highland dam which is burst, then flows down and back UPHILL to the Skinners' place to drown the rats (who are not adapted to swim at their current size and weight).

Of course there was no real dam there, and you can faintly see the ocean behind it, so the water of the 'flood' is another special effect, and it all looks so hammy that any shredded suspension of disbelief that remained went right out the window in a fit of blustering laughter. What an inane ending to an inane film! Okay, so that's not 'exactly' the ending, but I won't reveal the predictable 'twist' after Morgan and the other survivors burn the rats bodies and clean up the drowned cottage. Let's just say you can see it coming from a few islands away, and it's been done dozens of times in other, similar ecologically-based films. Granted, for '76 it was more of a novel idea, but it still doesn't really explain where this shit came from to begin with? Hey, yeah, 'Food of the Gods'? Hi, it's Magma. Your neighbor. Yeah, the hot guy. Oil and I have decided that there's really no room for another volatile liquid beneath the earth, so you'll find an eviction notice posted to your stream. Actually, I like to imagine that there was fertility God lying in slumber beneath this island, and he had a wet dream which soaked through to the surface...

At any rate, this is a pretty shitty flick with a few laughs to it, that failed to make much of an impact during its box office haul and swiftly sunk to the level of B-horror. The actors don't try a hell of a lot, and why should they? The rats dominate most of the film, and even the 'sequel' that was released in the late 80s (with only a few story ties to this original). In HD there are a few nice scenes of the woods on the island, but apart from the hammy visuals of the rats and chickens, there aren't many effects of note. The score isn't particularly gripping or memorable, and the 'message' of the film has since been played out to death. It's also not really scary, as in many bad horror films the stupid victims resigned themselves to their deaths, when they should have been running. It's not like they weren't warned...so now I'm warning you, don't bother with this movie, even for free on Netflix, unless you're specifically seeking out something awful to kill time.