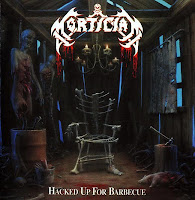 In a medium where musicianship, variation, atmosphere and extremity all contribute to a band's broader appeal, it's very easy to understand why a group like Mortician is so often raked over the coals. No one can really argue that the fourth characteristic is in ample supply on their records, but at the same time, the first three are often severely lacking. This is not an act which prides itself on melody, memorable songwriting or accessibility to a wide fan base, but instead on unswerving, unapologetic momentum and gruesome lyrical themes which explore the primary and primitive motives of extreme gore and horror. That said, any childishness inherent in the compositional style is deliberate to its concept: it becomes difficult to fault Will Rahmer and Roger Beaujard for a lack of innovation or nuance to their writing, when this very aesthetic of saturated primacy is in of itself distinct.

Hacked Up for Barbecue was the first proper full-length recording after a trio of cult EP predecessors, to which it stylistically adheres, though the production is taken to a new level. The low-tuned, pummeling palm muted grooves hail from a convocation of early grindcore (Napalm Death, Repulsion and even Carcass) influences and a dash of Hellhammer's infernal darkness. Sodden, cheapened death/thrash sequences very often erupt in the midst of some loping, roiling chassis, and there are numerous occasions of accelerated tremolo picking which is sure to honor Mortician's Floridian forebears like Obituary or 80s Death. All of this is enveloped in a muscular tone with a lot of bite to the mutes, to the point that even the simplest and familiar riffing sequences experience a new sense of grave-dirt richness. But perhaps more distinguished is the speaker rupturing bass sound, soaked in so much distortion that it sounds like static in a submarine, or like mud being slowly churned into a fine paste. If you've experienced a lot of noise music, Rahmer's tone is very much compared to much of the low-end filtering that often occurs. It's not impossible to follow his note configurations, which generally mirror the guitar, but it adds this real sense of ominous sickness to the mix.

The drums on this and many Mortician records have been programmed by Beaujard, but their hostile and mechanical nature has somehow always worked within the context of this very unnatural songwriting. The combination of these soulless beats with the mucky bass and depraved guitars often recalls industrial greats like Godflesh, but this comparison ends with Rahmer's monotonous, low-end barbarian growls, which could probably be attached to some sonic voice and used to burst kidney or gall stones. There's not much variation here, a fact that often draws the ire of many listeners, but Rahmer's inflection is so flush with the surrounding guitars and bass-lines that I just couldn't imagine it any other way. He is what he is, and he's never pretended otherwise. Their effect might come off sillier than, say, Craig Pillard's stint with Incantation in the early 90s, but there's no question that they provide most of what we'd consider 'atmosphere' to this music. If there were a lot more than an occasional rasp or scream, for example, it likely wouldn't possess that same, thuggish charm or consistency.

Like Impetigo, Mortician was a band that relied very heavily on samples to break up the brunt of the riffs' sameness, to the point that you can gather up your horror buff buddies and play a game of 'name that film' as you listen through. I'll give the duo some credit, because they're quite good at picking bits of slasher flicks, cult sci-fi/exploitation and other chillers to intro particular tracks, and they don't use these 100% of the time. In particular, a lot of the shorter pieces like "Abolition" and "Inquisition" eschew the ritual entirely to get a jump start on beating your face in with their robust, necrotic sludge tones. But where they work, they really work, like how the phone conversation from When a Stranger Calls inaugurates "Bloodcraving" (and the whole album), or the narration from The Road Warrior sets up "Apocalyptic Devastation". The lyrics are all quite focused on simplistic, to the point imagery, influenced heavy by how they were handled on a record like Death's Scream Bloody Gore. Often pitifully brief even in a longer track ("Necrocannibal)", but nonetheless an aesthetic match for the under-sculpted music.

Unlike Ultimo Mondo Cannibale, which lost me due to the rather uninspired riffing patterns, Hacked Up for Barbecue manages to hold my interest due largely to that rich, juicy tone, like a fat undead steak that I want to plunge my rotten teeth into. The actual chord progressions aren't incredibly interesting, and rarely does a single tune contain more than 2-3 of them, often played at varying speeds alternated between chord and palm mutes of the same sequence. Still, they do choose some opportune moments to break out into some saucy, corpulent thrashing or virulent death metal assaults that break up the predictability of the big, deep grooves Mortician subsists upon. As a result of these and the well implemented samples, Hacked Up doesn't ever grow tiring or exceedingly repetitive through the 50 minutes and 24 tracks...

Granted, this album could be better, with more solid riffs per song, and perhaps a few wilder leads or eerie, atonal melodies produced through the guitars that would give it a much desired extra dimension without it abandoning that signature, psychotic bluntness, that direct attitude. Their 2001 effort Domain of Death is the album I find myself most returning to, but I have to say Hacked Up for Barbecue places a strong second in their discography. It's not a remarkable effort by any means, but there's something so livid and fresh about its approach, and the varied ingredients congeal into an 'endearing' neolithic sense of purity and hostility. I've opened up for the band some years ago, and seen them perform other times, and they really carry this primal grind into the live setting, only it's loud enough that you might start defecating your own innards. Not much sentience or wit beyond a schoolground bully who finally finds himself with a meat cleaver in his grasp, while the teachers all have their backs turned...but then, to the sicker among us, is that not entertainment?