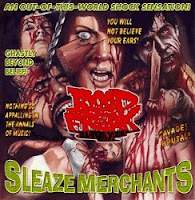 Had there been a Razorback-like record imprint in the late 80s, and had Blood Freak 'actually existed' during that time period, then I've little doubt they'd be one of grindcore's beloved cult acts on a tier just below the greats like Carcass or Repulsion. Alas, despite the retrofit 'demo' recordings tacked onto the end of their debut, this was just not to be, and they're more or less just a low-rent alternative to other Razorback artists like Splatterhouse or Ghoul, only far simpler in execution. Granted, I can't exactly hold this sort of misdirection against the Oregonians, as it fits their retro flavored modus operandi for horror and exploitation films quite well, but even though the dirty laundry is out in the open, I think this is not exactly a ploy that many avid underground maniacs might appreciate.

Sleaze Merchants is, in fact, the band's first album, recorded and released pretty soon after the band's 21st century formation, and it bears a lot of the typical calling cards of its label and aesthetic niche. Lighthearted splatter, gore and chills delivered through brief, concise tunes clocking rarely beyond 2-2 1/2 minutes, with a handful of riffs splayed out in 'fun' progressions heavily reminiscent of English forebears like Bolt Thrower, Carcass and Napalm Death. There's a bit of a D-beat influence also, generally written in to set-up or counterbalance a faster, Floridian tremolo palm mute riff circa Death or maybe Autopsy. Another curious characteristic are the bolder, rock & roll grooves sparsely strewn through the record, which remind me of Australians Blood Duster, in terms of how they contrast against the grind elements. The lead licks are admittedly superlative, a lot of fun, though they also channel more of a hard rock style than the frenetic and randomness generally applied to solos in extreme, grinding death.

As usual, the band implement loads of samples to introduce just about every track, but in Blood Freak's defense a lot of these are somewhat mortifying and well-selected from appropriate cult works like Night of the Creeps, Blood Diner and Blood Demon. Just the first few seconds of most of the songs here had my girlfriend screaming at me to shut the disc off, so mission accomplished. Vocals are a meaty guttural bark interspersed with both Carcass-esque snarls and even more ominous, toilet-boil flush gurgles which are outright hilarious where they appear; it's also pretty funny that the 'demo' tracks only incorporate the first two of these timbres, basically dating them to the late 80s when only a few bands like Carcass and Deicide were spewing them forth. The drums are solid but perhaps a bit too tin beneath the bulk of the guitar tone, which is repulsively swollen through both the slower, grooving movements (like the bridge of "Awakening the Beast") or the intensified, uptempo sequences. The bass, while audible, does little more than ape the guitar.

If you're not averse to the themes typical to the Razorback lineup, and admire the cheesy gore and terror that multi-instrumentalist and vocalist Maniac Neil himself worships, then Sleaze Merchants is certainly a decent means with which to kill 30 or so minutes. But be warned that the song structures are exceedingly simple, with only about 1-2 riffs each that hardly feel fresh more than they feel juxtaposed from acts like Carcass, Impaled or Exhumed. As a grind record, it's not that intense, more like a Halloween party with enough rock in the guitar patterns to render it somewhat accessible to your guests. My main issue with the album is that, while Blood Freak is quite adept at snatching samples, the riffs are never as volatile and impressive as other acts with the same gimmick, and ultimately it's no deeper than the cover artwork. If you find it fun to look at, then you'll probably also enjoy listening, but it hardly leaves behind a smoking, cannibal infested crater.