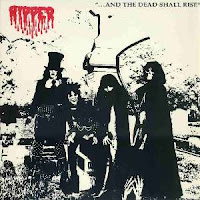 Akin to fellow 80s acts like King Diamond, Impaler, Exorcist and Halloween, the Texas Ripper sought to espouse the horror themed theatrics of big names KISS and Alice Cooper into a harder hitting metal sound you could place somewhere between trad 'eavy metal and the emergent USPM scene. Granted, they were a painfully obscure act, on a rather tight budget, so one might forgive the trashy vampire cabaret look they were aiming for, immediately apparent from the cover photograph. In terms of quality, they had some potential to them that was muddled by what I might dub 'too many paws in the puddin'. The decision to use the vocals of all four members is the primary suspect, creating a cheap and cheesy sense of inconsistency in bad need of an edit.

The band was formed relatively early on, in the later 70s, but nothing really manifest until the middle of the next decade. Musically, these guys (and gal) wrote loud, visceral heavy metal riffs with a bit of chugging force to them that seemed like a grimier alternative to acts like Manowar, Tyrant or the Canadian Thor. The note patterns were not particularly interesting or spectacular choices, but they're efficient and in their own way quite abrasive, and surefire arena pleasures in that they function off simplistic progressions of chords that seem custom generated to catalyze headbanging among their audience. The pace is generally mid and muscular, with some palm muting to propel the girder-strength of the chords, but they'll occasionally also incorporate a decent, whiny lead or melodic sequence that hints at further dimension. A few of the tunes like "Sinister Minister" have an almost psychedelic Sabbath flair to them, perhaps due to the rawer fiber of the guitar tracking and 70s appeal of the chops, but overall it really places itself in that crushing 80s vibe.

The caveat is that instead of Viking berzerkers baring their pectorals, you've got a gaggle of graveyard ghouls in mascara and clothes you'd expect to see in a theater adaptation of an Edgar Allen Poe story. With the exception of the genre anthem "Metal Mission", all of these songs deal with blood sucking, mortality, naughty bondage ("Don't tie me down, just tie me up..." was their catchiest phrase here) and other themes you can soak in the moonlight of a fantasized Halloween night, in those halcyon days when leather, liquor, sleaze and excitement walked hand in hand with tricking and treating. That said, these guys were clearly raised more on Gothic horror than exploitation and gore, so don't expect too much blood and guts. They were hardly burning churches and sacrificing live animals on stage, they just put together the look for fun and laughs and obviously a live reaction that they might not otherwise have gotten.

One characteristic that really stood out to me on the album were the synthesizers (contributed by a friend of the band), which some might accuse of being overused, but might genuinely be the best part of this. Most are used as intros, but a few pop up at other choice climaxes to great effect. Very John Carpenter aesthetically, as if they were written to score an alternate sort of slasher film to Halloween. Honestly, they build up such a level of creepy, campy nostalgia and expectations that the riffing and heavy metal architecture often feels like a letdown. The real issue, though, is that all four members decided to contribute vocals. The female vocalist and bassist Sadie Paine (they all had handles like that) really lets go like a whiskey swilling harpy in tunes like "Night Cruizer" or "Don't Tie Me Down"; she clearly had a great pitch and volume, and might have made a female counterpart for the King himself; sure to please fans of groups like Bitch or Hellion, but at the same time, she can get on your nerves pretty quickly. As for the male vocals, one of the guy's has a haughty pitch redolent of the US Tyrant or maybe Lips of Anvil at his most manly, but the rest are downright inconsistent if not corny (like in the interchange of "Sinister Minister" which is just too much to bear).

The production here's a bit raw and underdeveloped, no surprise since I've read that this was basically a pair of demos smashed together into a full-length format, but you can generally pick up what they're putting down, and it's not a lot worse than some of the earlier recordings on labels like New Renaissance or Metal Blade. The drums are smashy and cluttered, and the bass doesn't do much of interest, but the vocals and guitars are loud enough to smother these minor nitpicks and in general it conjures a brash, lively, live feeling to it which captures what they might have sounded like at a gig. One of the crucial traits during this period was, of course, the memorable chorus, since metal was nearly on par with pop in terms of popularity, and I feel that Ripper really come up short in this department, no matter how much shouting or howling they use to deliver those money shot lines between verses. Combined with the average riffing, the irritating contrast in the varied vocals, and the fact that the keys seem to atmospherically outclass the metal ingredients, it's not much of a stretch to understand why they never really broke out...

Those quips aside, Ripper is hardly some awful band of nothings, and ...and the Dead Shall Rise has become somewhat of a collectable, especially in recent years when cult heavy metal is once again in vogue. I might even go as far as to say it's better than it looks. Fans of acts like the aforementioned Hellion, Halloween, or Exorcist, or other unsung undergrounders like Diamond Rexx or Witch might discover they enjoy this, but it's nonetheless a bit amateurish compared to some of the stunning US metalworks of 1986. Those interested will probably have an easier time picking up the Black Widow Records re-release from 2003, and the band even released a followup in 2009 through that imprint, called The Dead Have Rizen, which I have not heard and can't comment on (I think it's only got 1-2 original members). This debut might fall below the radar of even some of the most diehard devotees of this niche, so if you like horror and unwashed 80s sincerity, check it out while you're carving your next pumpkin.