Deceased - The Blueprints for Madness (1995) 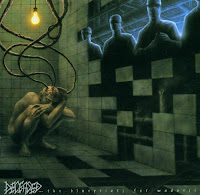 As crucial as Deceased's sophomore full-length was to the development of their later works, The Blueprints for Madness might better be dubbed 'The Blueprints of Better Albums to Come'. For while its riffing variation and the horror-borne atmosphere through the album are nearly as potent as its successor Fearless Undead Machines, the production here pretty much kills the deal, holding it back from that plateau of greatness they've since achieved and, in my humble opinion, never stepped down from. It isn't that this album lacks charisma, but the guitar tracking in particular leaves much to desire, and I'd almost love to hear a remix of Blueprints. Keep the music, toss in better leads, and certainly keep the incredible Wes Benscoter artwork (one of his finest), but fix that ugly tone...

This is not quite the refined, melodic Deceased many will recognize from records like Surreal Overdose and Supernatural Addiction, with all the tasty speed metal flurries and British influenced harmonies, but you get a lot more of their punk, hardcore, splatter-thrash and even a tint of grind, all brought forth from the 1991 debut Luck of the Corpse. Tunes like "Into the Bizarre" bring out a lot of the early Voivod circa 1984-1986, though not quite so eerie or dissonant in terms of atmosphere. Even a few, slower, dreary, doom-inflected guitars show up. King's vocals are at their roughest here, from his usual haughty barks and vapid, mournful refrains to more directly harrowing growls and rasps level with the other extreme metal of the mid-90s (some provided by Les, the bassist). The drums have a pretty organic mix, lots of power to the fills and a very blocky sounding kick drum that manages to present itself despite the smudge of the guitars. Bass is pretty good, and the leads slice through the mix with a decent effect, but the rhythm tracks sound far too muddy and indistinct and they're hands down my least favorite elements...

It's not that you can't make out most of the notes, or even all the notes, but they just sound so cruddy to my ears. When the band is churning out an accelerated rhythm in basic punk/grind chord progression like in the calamitous "Alternate Dimension", it doesn't make much of a difference, but when they hit the slower palm muted power riffs it's fairly repulsive, and not in a positive way. It seems like a conscious decision, too, because it's not like the rest of the instruments and the vocals sound so underwhelming; in particular there are sequences where Fowley is barking out some insane line with just enough reverb that it sounds truly ominous. No, it's just a pretty fledgling tone that suffocates the note patterns rather than letting them breathe and sear themselves into the listeners' memory. Not that the drums and bass sound exemplary, they're vaguely demo level in depth, but the fusion of deeper, surgical thrashing guitars and corroded meathook chugs deserved a little more polish.

Otherwise, the lyrics and concepts behind the songs here are classic sci-fi weird/horror which Deceased have proven one of the best at translating into the medium. As with the later albums, Fowley really gets into character, and each piece feels like a 'story', often told from a first person perspective, which draws my imagination back to late nights watching films on the TV horror block which were morbid and memorable despite a lack of budget. Synthesizers, samples and other orchestration appear sparsely throughout the 52 minute run-time, always contributing atmospherically even where they lack fidelity. The Blueprints for Madness is no slouch when it comes to composition: there are tons of riffs erupting everywhere, all of them varied, and many quite good, but the production doesn't allow them to reach their full, terrifying potential. The Virginians seem to possess a curious, linear progression in terms of their records' quality, and this one definitely inches beyond the debut, but they would only keep improving after this; and for that reason, even if this is well above average, I rarely break this out over Fearless Undead Machines, etc.