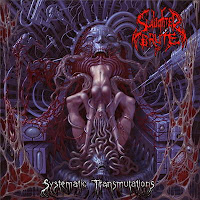 With a handle like Slaughter Brute, you'd expect this Ukrainian act to pull out all the stops and deliver one of the most grinding, grueling and grotesque experiences in death metal. And yet, there's a curious level of refinement to their compositional skills which renders their sophomore outing Systematic Transmutations slightly less crushing and more adventurous than I was predicting. Not that it's necessarily anything new in terms of technique or versatility, but there's just so much happening on this album that you're never given a moment's breath to think much about it. Of course, all of the traits common to brutal/tech death metal are present: pavement pounding double bass beats, guttural barked vocals, punching grooves and arpeggio skills all collapse into a controlled chaos.

This is 100% one of those mildly progressive, surgical and scientific albums which is not going to appeal to anyone whose idea of death metal ends at around 1993 and can't seem to stomach anything that isn't simply an endless recycling of those early aesthetics. Slaughter Brute has far more in common with acts like Spawn of Possession, Psycroptic, Necrophagist and Beyond Creation than Grave and Incantation. Systematic Transmutations is also a pretty clean recording, with little atmospherically occurring beyond the instruments themselves. The harried, machine gun percussion is polished and placed straight against the ears, while the guitars tone is thin and punchy enough to handle the rhythmic acrobatics, with plenty of digitized effects on the lead harmonies and upstart melodies to counteract the mute-streams and picking spasms. The bassist is particularly good, shifting between a low tone and some plunkier hysterics, and I found myself often following what he was rolling out beneath the frenetic arpeggios and contained chugging sequences. In truth, all of the instrumentation is up front and personal, clean but not so sterilized that it doesn't feel reproducible in a live environment, and if you think about it, this is fairly essential for a band performing which such precision timing.

The lyrics revolve around mind control and other forms of scary experimentation, dystopian technologies and a few traumatic situations like "Victim of Incest", so it's not strictly the gore, rape, and necrophiliac violation; it may, at times, actually try to make a point, and it's clearly more unique and interesting than their first album. Though the band's logo and the title font here are kinda cheap looking, the artwork is quite excellent, an H.R. Giger-styled fusion of bio-organic forms and machinery with a sexy symmetry that provides almost an optical illusion. Ultimately, I got quite a lot out of the record after numerous listens, with particular favorites in "Not Learned Integrants", "Hypoxemia Neural Phenom" and "Cyanotic Purulence". The intro and interlude pieces are well done, short ambient segues which reflect the band's futuristic ideas. It's neither perfect or incredibly memorable, and it won't be for everyone, since it's almost the antithesis of the Autopsy and Incantation worship currently trending; but if you're open to this sort of spurious and clinical modern death, then these guys should be added to your radar.