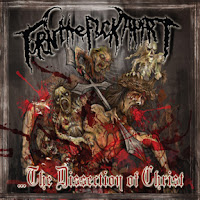 One would never accuse this Kansas band of 'sugarcoating' anything, as they've chosen not only one of the most provocative names possible to write under, but also a pretty blatantly offensive album title and artwork sure to distance them from their neighbors. Not that this is anything novel in the realm of extreme metal. Torn the Fuck Apart just happens to walk the most direct, sacrilegious, unflinching path possible in expressing its unrest, and this translates very cleanly over to their musical output, which is unremittingly overwhelming in its violent impulse. Whether the band is laying into some meat-fisted groove or exploding into a more technically inclined bloodshower, about the only respite they'll grant you are the samples or the minute long instrumental "Purgatorium", which creates a bizarre contrast against the surrounding punishment.

This is no mere band of slam thugs: surely, they've got that side of the spectrum covered with a battery of palm-muted grooves, but these are often interspersed through fits of more technical, clinical guitar work. A perfect example of this is the title track, where the perplexing variety of riffs creates the impression of the listener's gruesome death being cut between two film clips: one of a rhinoceros trampling, the other a school of piranha stripping off the flesh and then thrashing about a red stream. A lot of the hyper riffs are influenced by groups like Suffocation, Deicide, Cryptopsy, and Cannibal Corpse, and a few of the grooves even feel similar to what the more brutal deathcore acts snuff out. While I can't say I was in love with many of the group's guitar progressions, some credit is due for how they manage to constantly send something different hurtling n your direction, making it almost impossible to sit complacent or become bored. I was especially into the frenetic streams of choppy mutes fashioned into very uncomfortable, skin tearing, and the reflexive and harried drum-work, but there's not really a particular category in which the band would be considered weak.

That said, I felt like the band might have oversampled a bit, since pretty much every track begins with a clip for somewhere, and I didn't feel it always necessary to break up the flow of fists and knees. While the loud sewer bass, drums and barked guttural vocals are all represented pretty well, I felt like the guitars were occasionally uneven in tone. For instance, it's great that the band incorporates some melody into the bridge of "Dead Religion" to offset the savage technicality, but it felt a little limp in execution. Also, while the band keep really busy throughout this album and flaunt some degree of versatility, overall the songs don't leave any impact other than the craters in my bones and cranium. Considering all of the weapons at their disposal, and they've got many (these guys can play), I think a little added focus would transfer into the memorability of the songwriting. Perhaps more ominous atmosphere created through some more evil sounding, less violent riff architecture would be a good match for the murderous lyrical blasphemy. In the end, though, while I didn't make a major connection to the music, there's not much of a limitation to their capabilities, and next time they roll the bones, watch out...