Embalmer - There Was Blood Everywhere (1997) 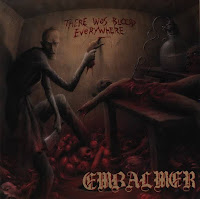 Though originally released as an EP in 1995, the preferred version of Embalmer's Relapse debut There Was Blood Everywhere is the mini compilation album two years later. Not because it's magically superior in terms of musical quality, but there's just more of it, the group's 1993 demo Rotting Remains added as a bonus. For one, this is the only version you're likely to find, and second, in terms of production and style, the two are pretty even, with Rotting Remains adding some badly needed dynamic variation to the EP tracks. Still pretty short at around 25 minutes for eight tunes, but it just flows better overall, even if the Ohio brutes still come up short of outstanding (beyond another of my favorite Wes Benscoter covers, of course).

Death metal was already about a decade old at the time this record dropped, but for its time, it's admittedly pretty goddamn extreme and was likely an influence upon countless ensuing acts in the brutal death or goregrind scenes. The blasting beats are legion here, especially in the 1995 material, saturated in this heavily distorted, fat guitar tone which seems at odds with the lighter impact of the snares and the thin kick drum in the mix. But they also churn out these surgery riff progressions that were more harried and vicious than even Cannibal Corpse of the day. The vocals are often the paired up contrast of a ridiculous, bloody, higher pitched rasp like those of a post-castration victim; and a guttural, gurgly, septic voice that it had to be ahead of its time. I don't much enjoy the former, since its exceedingly overbearing and goofy, but where you're just getting that lower, rumbling timbre over the flights of guitars, I feel like the band functioned pretty well. They also incorporate these enormous lurching grooves into a few of the songs that come across like a technical alternative to Godflesh or Bolt Thrower; especially on the Rotting Remains songs like "The Cellar".

On the whole, the production here is pretty muddy, but surprisingly clear enough that you can make all of the visceral details, from the lumpy bass lines to those supersoaked entrails of guitar. A few of the transitions in tracks like "Blood Sucking Freaks" seem cluttered and trampled by the sheer volatility of all the vocals and drums, and a few of the vocal patterns in there are laughable (especially the rasped screams). In addition, I wouldn't call the riffing all that impressive. It's blistering fast and rabid thanks to the tone, but there are no actual songs of note throughout There Was Blood Everywhere that I'd categorize among the better brutal anthems of the 90s. Leads are messy, wild screams that zip over the infernal undercurrent, and the lyrics to most of these tracks are pretty basic, comparable to old Chris Barnes Cannibal Corpse or Mortician. The chord progressions often felt a little bit like an update to Repulsion or Napalm Death of the late 80s, with perhaps a dose of Suffocation's Human Waste for good measure, but painfully few are memorable.

That said, Embalmer, if rather unproductive through the years (they weren't active from 1997-2005), had a fairly explosive take on the form that, with some refinement, might have further established them as one of the chief extremists of the 90s. I can recall some buzz and excitement about the group during this period, along with other sick Midwestern fucks like Lividity and Fleshgrind, but it really didn't pan out due to the band's lack of material and the huge hiatus that interrupted their ascent. There Was Blood Everywhere is certainly the sort of album you can picture people being serial tortured to in some dank, earthen basement without even a proper floor (perfect for the inevitable burial of the remains), but beyond its aggressive visage and primal, repulsive production values, it's just nothing spectacular or even necessarily 'good'.