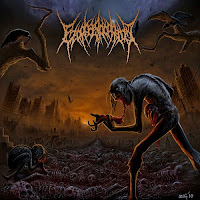 At long last, the medical knowledge of brutal death metal musicians has surpassed my own; I hadn't the faintest freaking clue what this Ukrainian band's name, Ezophagothomia meant, and after a brief skim of online dictionary resources, I still do not. Not that anyone can really read the logo here in the first place, but I must admit it looks great over the Jon Zig artwork; this guy once again earns his paycheck as one of the finest cover illustrators in the genre, pretty much guaranteed to make your band look effective, and really, I could stare at Instinct of Inhuman Development all day it's got such a great balance of colors and ghastly details. But could I keep listening to it all that time? Yes and no.

Ezophagothomia plays a very structured and chug-heavy brand of slamming/brutal death which would hardly seem a novelty to anyone's ears, and the focus here is almost entirely on the production and intensity rather than the songwriting. They're not exactly terrible at coming up with riffs, because the sheer mechanical confidence of the constant palm muting in of itself can prove entertaining, but like a lot of albums in this niche, the tracks do begin to run on into one another and lack much individual distinction. That said, they're not without some degree of variation in terms of how they pace themselves: deep, muscular grooves are morphed into even slower, bruise & cruise rhythms and occasionally they'll pick up the tempo like the blast in their cover of Mortal Decay's "Rejoice in Moribund". Lots of squeals of various pitch are used to cap off individual guitar phrases, in true brutal USDM fashion, while many of the riffs certainly drew their inspiration from names like Cannibal Corpse, Suffocation and Morbid Angel somewhere down the line.

It's truly the guitar tone that is the star of the show here, it's so rich and full and percussive that it really steers all the action, almost keeping the time more than the drums. Almost guaranteed to please fans of similar acts like Kraanium, Ingested and Abominable Putridity. However, the beats are quite competent with loads of double bass sequences that grind the listeners' bones into pulp. Vocals are a brooding guttural which is often held out and garbled to the point that it creates its own, nihilistic droning gurgle effect. The bass is low and bouncy, but often hard to make out over the squeals and meat of the guitar tone. What the Ukrainian beasts savages seek here is to present the listener with a roiling, fit-for-pit wall of force, and to that extent, at least they succeed. Seeking to score your next fist fight, or to practice the zombie walk? Instinct of Inhuman Devourment would provide a reasonably functional soundtrack to such activities.

Ultimately, though, the incessant, knee-breaking, battering ram grooves that comprise most of the album are in dire need of enhanced atmosphere. Whether this is through the incorporation of wailing lead guitars, which the band seems to avoid, or a greater abundance of the morbid ambiance they capably evoke with the intro and outro track, I was constantly thinking to myself that another layer of musicality would go a great distance towards better attaining my attention. These guys are certainly decent at digging into a brutal breakdown and lathering it with a broad growl, but those become the highlights of the album, and tracks like "When Earth Will Be Tired of Us" and "Parasitic Vivisection" would have been better served with starker contrasts, like higher pitched guitars that counterbalance the feckless low end concentration. From a technical standpoint, I liked the execution of the guitar tone and the packaging to this disc, but it's not much more memorable than the last time you stubbed a toe...which is sort of the point, I'll grant you, but not always the hallmark of greatness.