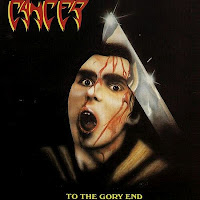 Cancer was definitely among those 20-30 formative death metal acts around the dawn of the 90s that you thought big things might happen for. Not that they were particularly special or impressive next to their far more crushing UK peers like Bolt Thrower, Benediction or Carcass, but they got in there early enough among the fans of heavier thrash and proto-death that you could see their logo turning up at gigs, their albums out in the local specialty shops. They had also managed to snag one of the more obvious and sought after monikers for the genre, which goes a lot further than you'd think in terms of accessibility when penetrating an audience, even in the underground. Their debut To the Gory End, while not their best album (that honor should go to its followup Death Shall Rises), was a reasonably primal hybrid of the death and thrash genres that always reminds me very heavily of another, more popular act from this period...

And that would be Brazilians Sepultura, circa 1987-1989. A lot of this probably has to do with the mix and production, in particular the guitar tone; both To the Gory End and Beneath the Remains were produced by Scott Burns, after all. There's a nice wash of fuzz on the guitar that gives it that same sepulchral, ripping and downtrodden feel like trudging through a decaying bog full of rotted, half-submerged coffins. However, I also found that the fiber of both the mid-paced thrashing riffs and the faster, tremolo bits were quite similar in how they were composed, perhaps with a few touches of the similar Slowly We Rot by Obituary. This was not a time when many albums were 'fully committed' to either one genre or the other, so Cancer pretty evenly distribute the riffs between the palm muted mosh pit hymnals and the faster paced picking that bands like Slayer and Death brought into the mainstream. The bass is very plunky and difficult to distinguish from the rhythm guitar, but the drums here had begun to incorporate a lot of the double bass and a few of the later crossover-charge beats that would eventually transform into the blast beat. Vocally, I was more reminded of Altars of Madness-era David Vincent than Max Cavalera, if not as ghastly; John Walker has a nice, bloody sneer to his gutturals that keeps them in an admittedly mid ranged pitch.

One of my favorite tracks here has always been the title cut, which opens with a menacing, symphonic synth and barrels through a number of potent riffing sequences, especially the frenetic speed/thrash played out below the vocals in the verse, but there are a number of other cool bits like "Body Count", "Into the Acid" or the spectral "Sentenced to the Gallows" with its threads of cleaner, eerie guitars that glide above the rhythm chords. To be honest, though, even these better pieces don't exactly resonate for very long in the memory, even though they still sound fresh whenever I return for another listen. The leads, where they appear, are fairly wild and zippy, but I always felt like there was simply a layer of atmosphere missing that would have made the lion's share of tracks more ominous and aggressive. As it stands, To the Gory End feels rather stripped in its delivery, and it doesn't have that riff for riff quality you'd recognize from, say, Schizophrenia, Consuming Impulse, Leprosy or Beneath the Remains. Half the tracks were pretty average even for a time in which the very notion of death metal was still a novelty, while the other half were decent enough to hint at a glimpse of future potential.

Lyrics involve, as you might expect from looking at the cover (which was censored in some markets), serial killers, murder, butchery, and hell, even hanging ("Sentenced to the Gallows"); the title track is even a tribute to the Hellraiser film series, so the horror influence is overt. All told, a fairly humble debut which was simply and understandably outdistanced, outclass and out-brutalized by other albums of its age, but probably worth a listen if you're into transitional death/thrash hybrids like Sepultura, Assorted Heap, Sadus, Protector and so forth.