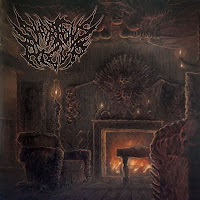 It would be difficult for me to discuss Short Bus Pile Up's Repulsive Display of Human Upholstery without first mentioning how absolutely phenomenal it looks. Not only 'graced' with one of Jon Zig's very best works, but I love how the Virginians' nearly unreadable logo really jives with the image behind it, that ghastly display of bones and flesh turned into room trappings. Even the fucking ceiling! One can just imagine the individual responsible for such a feat, taking the old 'Most Dangerous Game' plot to a whole other level of artistry, and clearly this is one of the best horror-themed visages I've ever seen for a death metal album. But it also comes with a caveat: that my superficial expectations for this music were set immediately quite high for the actual music.

No, Short Bus Pile Up do not quite live up to that level, because frankly there's nothing creepy, shocking or incredibly distinct about the music they perform. Hell, there are single riffs on oldies like Leprosy or Cause of Death that are more frightening and evil than the sum of every song on this disc. Once you're past the familiar, misogynistic brutality of the lyrics, song titles and artwork, it's nothing out of the ordinary. But that aside, where I find the value in this group is that they have one of the better takes I've experienced on the 'slam' subgenre of the style. Eschewing the meat-headed monotony of many of their peers to create an album that is better balanced rhythmically, they provide plenty of punch for the flailing fisted pit monkeys and also some uptempo, clinical surges of intensity that generate excitement. The songs are more highly developed than the earlier material I've heard, and add to this the very deep, murky and nihilistic production values of the record and there's no doubt this is serial killer slam to which few people are going to remain still...

Vocals here are a wretched guttural deep enough that it could very easily camouflage itself against the low tuned guitars and bass drum, and yet the three seem like a trio of neanderthals beating each others' children and tribeswomen over the head, dragging them back to their respective lairs, and keeping score on the wall with cave paintings of each others' blood. The riffs are never blindingly complicated, but there is clearly a bit of effort placed into the faster sequences, almost like a crud-soaked technical thrash that generates some excitement for those breakdowns; a crucial contrast that prevents the album from becoming boring. It also helps a lot that the lion's share of the songs are really short, around 2 minutes, but still pack themselves with plenty more note progressions and tempo shifts than your garden variety grind or gorecore. The mix to this is fairly organic, also, somewhat lo-fi in comparison to a lot of the other slam bands I've checked out. It can seem slightly muffled and under-polished, without those rich and meaty modern tones, and the bass lines on this album seem like little more than an afterthought to the guitar chugging, but it's desirably honest all told, like they recorded it in someone's $2500 basement studio.

Apart from maybe its great title and cover, I'm not sure Repulsive Display of Human Upholstery is going to ascend to a cult classic status 5-10 years down the line. But for what it is, it's pretty entertaining. Short, under 30 minutes with a few alternate song versions stitched to the end, and it never grows boring. I'd like to hear even more of that variety they hint at in the future. They've got the brawling and bouncing palm-mute rhythms down pat, but lack some wild, incendiary leads or atonal, freakish melodies that would create a more fulfilling atmosphere. Also, though they're unlikely to cause much friction with strict devotees of the genre, I get a little tired of the Cannibal Corpse/Mortician lyrical trappings, which these guys never seem to escape here unless you count the few scatological leanings; though in a few of their disgusting rhyme schemes they evoke a handful of memorable lines. I suppose after staring at that artwork for about 15 minutes every time I return to this disc, I just want something so much more atmospheric and sick; but taken at the music's face value, it definitely could be the start of something promising. Fans of USDM butchers Devourment, Lividity and Deeds of Flesh should check this out.