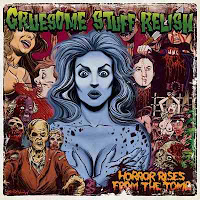 Spain has served as a safe harbor for some pretty sick fucks this past decade, particularly in regards to the goregrind/death metal set, but while acts like Machetazo, Haemorrhage and Avulsed seem to have a genuine sense of spattered pathos surrounding their recordings, the Asturias trio Gruesome Stuff Relish definitely delves into the more campy side of the slaughterhouse. No surprise, then, that this makes them a pretty snug fit for the US based Razorback Records, who thrive off this sort of concentrated silliness and released the band's first two full-length efforts. Unfortunately, though there are a few admirable qualities to the Spaniards' approach to this rapidly tiring niche, I found the painfully average riffing to null my appreciation in short order.

This is essentially another of those groups which owes its very existence to what Carcass were doing in the late 80s, with perhaps an inkling of Repulsion thrown in for good measure, and the B-movie/exploitation film lyrical influence that most of their label mates and goregrind peers all share (with threadbare lyrics akin to Mortician). Riffs are churned out in a bevy of familiar, primitive chord progressions that have just as much in common with punk as metal, but with a sordid darkness to them that reminds me of a mesh of Bolt Thrower and Autopsy. I did enjoy the layer of raucous filth applied to the guitar tone, almost like a punk Obituary on tunes like "The Symbol of Tupanamba" but the actual patterns of chords don't seem as if the band spent a large amount of time and detail in constructing them, and it quickly becomes a been-there, heard-that sort of record which is doing little more than paying tribute to its influences. Granted, some will argue that this in of itself is the charm in a record like Horror Rises from the Tomb, but to be honest with you I'm getting a little tired of the apathetic acceptance of effortless metal music just because it looks good and the band cares about things we want to hear...like zombies, cannibal, serial killers, tits...

I'm not accusing this record of being particularly awful at what it sets out to accomplish, mind you, but there is very little to distinguish it from its carnal peers; only when I listen to, say, Exhumed's Slaughtercult, I am rewarded with manic riffing and grisly intensity that makes it worth the while. The shortened track lengths and lack of much variety here really hit a wall after about 5-6 tracks, and though I dig the repulsive grinding edge to the guitar and the violent brickwork laid out by the drummer here, and even the broad and bloody pairing of the Carcass-styled rasp and growl (occasionally sauteed in a more swishy guttural inflection), it's that lack of interesting or truly entertaining riffs that really wore out its welcome. Admittedly, the colorful and horrific camp of the cover collage is pretty sweet, and I like that they never over-splurge on the use of samples, but musically this sophomore just wasn't on par with Ghoul, Machetazo, Frightmare, Splatterhouse, Blood Freak or the many other haunted house freaks and blood suckers filling out this niche. S'alright, but I get more chills and thrills from a single line of Vincent Price dialogue.

Posted by autothrall at 7:12 AM