Cradle of Filth - The Manticore and Other Horrors (2012) 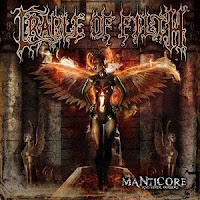 England's eloquent Gothic horror metallers Cradle of Filth have been on quite a tear of late, producing two of their most potent and practiced albums in Godspeed on the Devil's Thunder (2008) and its successor,  Darkly, Darkly, Venus Aversa (2010); at least since striking a creative peak with their lush Lovecraftian homage Midian in 2000. I'd even go so far as to say that the band's steady determination and consistency have won them back quite a number of naysayers who quickly dropped the group from rotation once it became 'cool' to do so. At least I know a few people whose averted fondness for their early albums has come full circle these past few outings. Love their image, loathe their image, envy the fact that succulent, saucy faux-Goth fan(g)girls will cuddle up to their records while you spend Friday night at home with your right hand (or left...or...both). Cradle of Filth could be geriatric gargoyles spit upon IV tubes and piss-pots: their music speaks for itself, and if anything, their tenth opus, The Manticore and Other Horrors goes further to cement their commitment to continued quality.

This is, at its heart, a bit less of a flagrant, flamboyant odious operetta than its recent siblings, but probably only because the band has become stronger at incorporating its symphonic textures into the metal riffing. To whit, it's not as seeped in boisterous orchestration as Dimmu Borgir's latest, or as overtly excessive as the latest Fleshgod Apocalypse; but rather tastefully slung over pieces like "Illicitus" or "Frost on Her Pillow" with everything from a flute-like presence to a simmering full-string bombast (as in the full haunted house treatment of intro "The Unveiling of O" or the piano-veiled outro "Sinfonia"). Choir vocals here are well arranged as a backbone rather than attempting to steamroll the core instrumentation, and the sultry female lines provided by Lucy Atkins, returning from the prior album, are also well fitted and far less evocative of the lamer drama present on some of Sarah Jezebel Diva's collaborations with the band. Most impressively, Dani Filth has really dialed back his performance to cut out much of the excess that alienated many from his timber in the past. You'll still get a taste or two of his impish, wheezing petulance, or a shrill scream, but he lays most of the verses out with a more smoky, laid back menace, or brief snips of gutturals, both of which are in truth far more intimidating. Lyrically, he's still one of the best penmen of poetic, horror tinted imagery strong on antiquity, myth and seduction:

What many will undoubtedly champion here, though, is the rock solid riffing foundation being laid out by Paul Allender, who has essentially bridged the gap between pure thrashing violation, an almost epic 'power metal' influenced architecture molded into the orchestration, and the expectant walls of tremolo picking or Nordic Bathory-styled chord batteries we usually associate with black metal in the 90s (beyond the more punkish Hellhammer/Mayhem roots). Granted, there are such an array of styles at war with one another in this music that you'll get no argument from me that it doesn't belong in any one category beyond the basic necessities for filing. On the whole, I wouldn't claim that all of the guitar progressions really stick. There are a few of the more base, thrash-punk like pummeling patterns that feel derivative or uninteresting in their payoff, but the guy is constantly firing off enough melody, business and variation that you'll never have to sit through any of the duller implements for more than a few measures. He's even got some progressive metal tendencies threaded through numbers like the titular "Manticore" which really play into the vastness of the experience.

The bass playing has never been a prime factor in Cradle's sound, and it hasn't much improved on this record beyond the fact that the instrument pumps along dutifully to the rhythm guitar. As for Marthus though, he's really cemented his seat behind the drums, laying out as professional and persistent thundering as you are apt to hear on such a higher visibility extreme metal record, even if the snares and kicks feel a bit too sterile to really feel them below the weight of the keys and guitars; and of course, he's also primarily responsible for most of the former, so the guy's just really earned his keep here these past six years, helping Dani emerge from the mediocrity of records like Thornography and Nymphetamine with class. On the whole, they've put the usual enormous level of work into the structure and production of the record, so that whether the group is hammering out some over the top orchestrated anthem with choir, or swerving into a more humble breakdown, it's all quite level and equidistant from the listener's ears. The choral contributions are really involved here, and it took a few listens to place them all, since they're not so brazen in the mix; but choices like the keening wail in "For Your Vulgar Delectation" really add a lot to the muscular drive of the guitar.

Now, as consistent and versed as this album comes off, it's not likely to place among my favorites in their lexicon, primarily because there aren't individual songs here that really stand to memory on the level of classics like "Beauty Slept in Sodom", "Desire in Violent Overture", "The Forest Whispers My Name" or "Her Ghost in the Fog". In fact, after about a dozen listens through the substantial 52 minutes of content, I couldn't name any of these to a career highlight reel. In that way, it reminds me a lot of Godspeed on the Devil's Thunder, an album which reinstated my own interest in their music but didn't exactly clout me over the head with fond impressions. As is often the case, I think I found the lyrics more compelling than the riffs or choruses. Yet, as a unified work, there's really no weak point to any one component. Whether I were to count myself among the band's legion detractors, or swooning vamps, the effort Cradle of Filth puts into their writing and themes is clear, and inspirational. Everything sounds seasoned, in place, and busy enough that The Manticore and Other Horrors should warrant numerous, if not infinite migrations off the CD shelf. Not their best (Midian would like a word), but easily on par with titles like Cruelty and the Beast or Darkly, Darkly Venus Aversa.