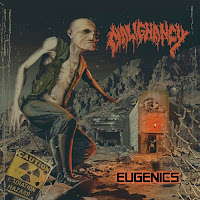 Though I've never been as fond of Malignancy as their close friends (and Roger J. Beaujard's primary band) Mortician, they're nonetheless one of enduring East Coast institutions in brutality, and have released a few decent records like 1999's Intrauterine Cannibalism with a fair amount of technicality alongside a less refined production quality than you'd find elsewhere in the USDM field. They've also possessed a somewhat uncanny characteristic that's difficult to place; perhaps through the enthusiastic, vile choice of album titles and song concepts, or the spurious performance of the guitars and drums, they've always had a different means of constructing their songs than many run of the mill brutal/tech bands mimicking Cannibal Corpse and Suffocation.

Eugenics, the band's second full-length for Willowtip Records (and third overall), continues this pattern of spastic, elasticized pacing, picking and intensity with the best produced barrage of pinches, squeals and psychotic hyper-blasting whirlwinds the band has ever conceived beneath the guttural percussion of the front man Danny Nelson. Lots of broken, fragmented beats lurch and collide about a chaotic matrix of incendiary, almost comically hysteric rhythmic tension, each piece a vortex of manic riffing which sounds like it's been snatched from some other brutal death outlet and then placed in a blender on top speed. Of special note here was the performance of Roger Beaujard on bass (he was previously the drummer), who adds a necessary level of harried proficiency that helps balance out the mischievous spunk of Ron Kachnic's frenzied note progressions. Who knew the guy was a regular Steve DiGiorgio or Roger Patterson? I also can't say I've encountered many guitarists in this niche who can squeal which such dynamic perfection as Kachnic...you could probably remove all the chords and chugs and his performance would still be amusing...

The entirety of Eugenics thus has an admittedly 'playful' feel to it, that is until the entire band finds itself on the same page and charges through a pummeling blast that will spin your head off its spinal support column.
At just about every turn, the band is throwing something different at the listener, and as a result the album demands a few listens just to absorb everything, even the more immediately excellent and memorable pieces like "Cryptobiosis" with its incredible, high-strung grooves. The production is more accessible than their later 90s fare, with a great balance between all instruments and vocals, I only wish I could hear Roger just a fraction more since he's going ballistic on that bass and it occasionally doesn't stand out so much beneath the rhythm guitar. The songs and lyrics deal with more than just your average gore, but with societal collapse and apocalyptic radiation, a great brutal death metal alternative to something like the Fallout and Borderlands games or the C.H.U.D. films. In sum, I'd say that the album's arsenal of acrobatic sensibilities outlives the quality of many individual tracks, but I enjoyed it as much as anything else in their backlog, if not more.