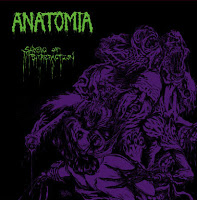 I've read lots of praise for Anatomia in the past few years, for how they press primacy and psychedelic intricacy into the traditional death/doom mold, but their Shreds of Putrefaction EP is the first time I've actually sat down to spend any serious time with one of the Japanese trio's records, consisting of 4 originals and a Repulsion cover. Right away, I was drawn into the grotesque, understated color palette of purple and green on its cover, and coming away from the listening experience I have to admit they're one of the murkiest sounding bands I've ever heard. Not that this becomes a major hurdle for the music itself, which revels as it soaks in this muddy, primordial aesthetic, but it would be unwise to go into this record expecting the smoother drudgery of the British bands who once pioneered this sound with a Gothic grandeur.

No, this is more of a psychedelic, unusual spin on the grimy death/doom materialized by groups like Winter, Autopsy and Asphyx in the 90s. The most obvious comparison would be their countrymen Coffins, but I actually found Anatomia's compositional style less straightforward. Ruddy, churning chords dominate the very live approximation of the mix, while the drums splash beneath the weight of the grooves. Vocals are a pretty nihilistic, disaffected cross between a bark and a snarl, hacking along like a lung full of blood, but I did not truthfully find them to be all that interesting. Nor did I really enjoy the actual riff selections, which seem as if they've just been changed around from numerous influences and then refashioned. Where the band gets far more fascinating is when they change it up from the general sluggishness. For instance, the doomy bass break in "Morgue of Cannibalism" really sets a creepy mood, and the weird, suppressed, spacy guitar tone that leads off "Suicides" is the sort of effect I wish they'd use more often. To their credit, the band is not exactly the 'slow' sort of doom/death; they mix up tempos well enough that the chord patterns never sag along.

Interestingly, their rendition of "Splattered Cadavers" from Horrified has been transformed into something more befitting their genre, a morbid and repressed feeling, drawn out slog with enormous, crushing guitars. Not that it's got the same charm of the original, but it's a fitting mutation. All in all, the sewer production and chord choices just weren't enough to satisfy me, nor did they ever feel 'evil' enough to live up to that great, gruesome cover artwork. It's heavy as fuck, disgusting and bloodied like a series of slow, wet farts after ingesting shards of broken glass, but all too rarely memorable. The lyrics are really nothing more than a cliched sequence of violence, carnage and horror that have all appeared on many death metal albums. Perhaps this EP wasn't the best place for me to start with them, and a full-length might allow for more of their experimental tendencies since it would have more space than the 20 minutes of this, but even in lieu of its filthy aural aesthetics, Shreds of Putrefaction is pretty bland all around. Didn't hate it, but didn't care for it either.