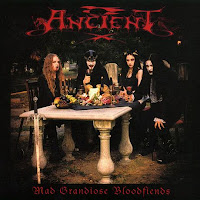 Ancient took a wrong turn around 1995-96 when Aphazel decided it was in his interests to channel his inner blood sucker and pursue a course of black metal vampirism not unlike what England's Cradle of Filth and their coattail riders Hecated Enthroned were doing around the same time. Svartalheim had been a pretty solid album, crude and atmospheric but possessing a lot of those primal charms attributed to their various countrymen in the early 90s; it's not well liked, but I honestly don't think the Norwegians have trumped it yet. The Cainian Chronicle, their first record for Metal Blade Records, brought on the wampyr themes, and it's pretty clear to me that someone in this band was heavy into Anne Rice and the pen & paper RPG Vampire the Maquerade ("The Cainian Chronicle", "Malkavian Twilight", etc). Not that a well written game like that is bad source material for lyrics and music, but Ancient manages to transform its fanged obsessions into a laughable parody in place of a sound that might have us jumping at shadows after sunset...

The problem is they just go too far with this formula, and as the result Mad Grandiose Bloodfiends sounds more like an album that creepy circle of incestuous Goth-friends at your high school would write as they share awful poetry with one another, whine about missing the latest Type O Negative gig and paraphrase bland guitar riffs from better bands. The cover itself looks like a lazy garden party attempt to impersonate Cradle of Filth, but what truly sinks this record into the shitter is the use of the various narrative voices that make it impossible to take seriously. With the exception of the two instrumentals wedged deeper into the disc, each original piece is drowned in cheesy Romanticism that comes off like some ghetto interpretation of Lord Byron, Edgar Allen Poe and William Wordsworth, another trait that reminds me a hell of a lot of Dani Filth and his band; only they have traditionally proven far more competent in how they craft their lyrics. Lines like 'bleeding from my lovelorn scars' and 'thou art the answer to all my dreams'. Sure, there's some variation throughout the album, with surprises like the lush and fetching instrumental "Neptune", the tribal piece "5" with its maddened cavalcade of whispers and percussion, and a version of Mercyful Fate's "Black Funeral" which plays it pretty close to the original in terms of pitch and performance, but those are really the beginning and end of its qualities...

Let's be clear: without the lamentably lame vocals and 'character' interactions, Mad Grandiose Bloodfiends would at least be a work of mediocrity with a few appreciable traits like the drumming, which blasts quite firmly where needed and is comparable with other Scandinavian outfits of the period. The only caveat was that there were some sequences in which the kick sounded like my washing machine when it acts up due to overload. The guitar riffs are often just 2-3 chords boringly cycled through predictable architecture, but I have to admit the airy leads and melodies would have been quite nice over a more interesting rhythm section. Keys are your typical haunted house dressings, and I'm sure the band thought they were quite 'eloquent' and 'profound' alongside the lyrics, but they incorporate pianos, clean guitars and even a cello to good effect here. In fact, the production on this album definitely places it in that mid 90s era where bands were tripping over themselves to leap onto the back of the turnip-wagon that was toting Emperor, Cradle of Filth and Dimmu Borgir off to their own respective destinies at the forefront of this genre. But at the same time, it reeks of desperation and creative despoilment, and as if Ancient processed its music too quickly and didn't think of any long term effects or consequences, so unlike In the Nightside Eclipse, Dusk and Her Embrace, or even Enthrone Darkness Triumphant, it doesn't feel timeless...just silly.

A huge part of this is the vocal interplay between Aphazel and Erichte, the latter of whom sounds incredibly bored as she recites her lines through pieces like "The Emerald Tablet" or "Willothewisp", even when she spins a little aggression into her inflection. Hearing these sorts of lines in a call and response with Aphazel's gnarled, Filth-like snarl is goofy enough, but when he refrains particular lines through the album it just becomes a chore, and when he screams lines like 'HAIL SATANIC WITCH!' or 'copulation grins upon my face, as we cum all over this fuckin' place', I can't help but start laughing, as unintentional as the humor might have been when they were writing this. At some level, I suppose the lyrics about love after death, worship of the pale female Gothic form and loads of cliches about moons, wolves, and ravens are suitable to the theme, but Ancient never does anything truly interesting with its material. There's also a lack of total commitment to these vampiric concepts, since "Um Sonho Psycodelico" is a strange piece about inhaling and popping drugs and hallucinogens, and "Her Northern Majesty" is a strange Norwegian pride track you'd have expected more from a band like Satyricon. Azaphel also lapses into these fits of Gothic narrative vocals that render the record even more awkward, as in "Blackeyes" where his voice echoes out over these groovier epic heavy metal riffs...

Mad Grandiose Bloodfiends needed about a year's additional development, and perhaps an outside producer to wade through the heaps of cheesy bullshit and convince Azaphel (who handled this duty here) that perhaps some of his ideas weren't that great. Had those conditions been met, then we might have ended up with a decent, middling black metal record with a few moments of elegant, stereotypical Transylvanian atmosphere that might be fun to break out every other Halloween while we bob for apples. As is, this is a ludicrous failure with an appeal only for its unintended humor or to those L'estats and Pandoras who stopped monitoring the progress of the world after about 1995. The weak selection of guitar riffs simply cannot compensate for how agonizingly awkward everything else feels. A good gag reel, sure, but a poor black metal album.