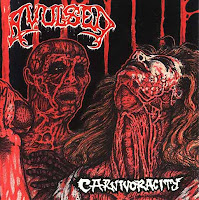 If we were to hold elections for a sole 'ambassador' of death metal from each of the nations in the civilized world, massive debates would ensue in countries like Sweden, England or the USA, where the scenes saw great success in the 80s and 90s and built many stable careers. Not so much the case for other territories, and for Spain, my ballot would very clearly be cast for none other than Dave Rotten, the man behind not only the Repulse and Xtreem Records imprints, and thus a crucial component of his scene, but two outstanding acts in Putrevore (his collaboration with the prolific 'Rogga' of Sweden), and the far longer enduring Avulsed, the latter of which got its start through a number of unsigned demos and then the 1994 EP Carnivoracity, which was later reissued through his own Repulse brand and expanded to 'full-length' status with the inclusion of live material.

Admittedly, this was a pretty rough release, and Avulsed has since had a number of superior offerings, many significantly so. The core of this experience is a pair of originals and a cover of the Chilean Pentagram's "Demoniac Possession". While the Spaniards would later take on a more brutal and busied mold for their material, Carnivoracity is quite contentedly old school in nature, with loads of tremolo picked riffs and a bruising back end that very much remind me of Death's Scream Bloody Gore or Autopsy's Severed Survival. Raw and flesh ripping in delivery, but the actual riffs themselves are not so haunting as many that had preceded them from Floridian antiquity. The vocals are a bit different, choppier and garbled guttural grunts that were more ominous and otherworldly than several of their influences, but the most surprising and impressive element to this is how its titular epic is cut into by this lurching, creepy death/doom passage with violins which reminds me of My Dying Bride or Paradise Lost... Otherwise, I just wasn't floored by the musical content or the ruddy production; even the drums, while able and loud, are sort of dingy.

The live addictions to the album, which comprise well over half of its content, also have some problems of their own, in the tinny guitars which are drowned out by Rotten's barking and the drums. You can make out the bass here, and most of the note structures, but it sounds like noise being flushed through the ears, even if the performance seems like it must have been tight for the audience at the Trallametal Fest (Granada) where the material was recorded. Here you'll get the two originals from the EP ("Carnivoracity" is shortened) in their stage personas, and a number of others from the following album Eminence in Putrescence (1996), but the fact that there is so much live and so little studio content definitely gives it a skewed sensibility, though undoubtedly the Repulse version of Carnivoracity is a better deal for the buck than the rarer, original EP. There are also a number of additional covers among the live tunes. The Slayer/Brujeria medley would be pretty obvious, but they also perform Demigod's "As I Behold I Despise", which took me completely by surprise! Dave and company know their shit...and always have.

This is competent if derivative material, but any fan of Rotten would likely attest that it's mere groundwork for the far stronger efforts to come, and Avulsed have since grown into a reliable source for goresoaked escapism. As it stands, the curious might wanna pass on this and head straight for their 1999 effort Stabwound Orgasm, but in truth their 21st century albums like Yearning for the Grotesque and Gorespattered Suicide have delivered the most carnage for my dollar. Some of the best Spanish death metal alongside Human Mincer and Machetazo. Also, Rotten's vocals on the Putrevore records are fucking outstanding, so check them out if you haven't already.