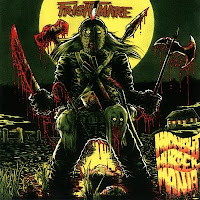 Midnight Murder Mania might seem like a relatively typical release for Razorback Recordings, but in actuality it's one of the label's seminal releases, dropped just as the label was reaching its stride in the earlier 21st century. Alongside Ghoul, Frightmare was probably one of the most rounded and accessible acts on the label, generated a fair share of buzz (at least among my circle), and they also had this 'home court' advantage for the niche, with a roster that included members of other Razorback and associated acts like Lord Gore, Splatterhouse, Whore, Engorged and Blood Freak; including Maniac Neil himself. Basically the lineup was a raucous rogues' gallery of that Portland, Oregon splatter death/grind scene, and this explains why the actual musical output bears so much similarity to those other acts.

Midnight Murder Mania is probably one of the most earnest and entertaining paeans to the fictional killers of slasher cinema in my metal collection, with most of its original tracks adhering to specific flicks like Friday the 13th, My Bloody Valentine, Slumber Party Massacre, Black Christmas, and Maniac. A heavy emphasis on the 80s. A few movie samples are included, but unlike some of their peers in this field they never tend to overdo it, letting the music perform its own hatchet to the faces of the audience. As usual, the music is a mixture of grind and death metal aesthetics with some thrash and punk influences, and it never takes itself too seriously, thanks to the lightheartedness created by the band's mesh of toilet flush gutturals, sinister Carcass snarls and haughty barked lyrics with feel a little 'tough guy'. I've never found the band to be quite so riffy as Ghoul in terms of overall quality, but they incorporate loads of leads, tapped melodies and other techniques to keep the music fresh, varied and multi-dimensional rather than heaping on saturated and banal deathgrind riffs you've heard a million times before.

Structurally there were a lot of riffs in the Carcass (Reek of Putrefaction/Symphonies of Sickness) and Napalm Death (1989-1990), and the band thrives at an uptempo-to-blasting pace with only a few notable breakdowns worth their salt. Most of the rhythm guitars aren't incredibly interesting on their own, but once the energetic drumming and hoarse barks and gargles are applied they definitely cut like a trick or treat bag full of taffy-coated razor blades. The instruments are all quite clear, with a nice churning tone to the tremolo mute riffs and a deep, if not all that exciting bass with an appropriate fuzz. They implement a few brutal 90s death techniques like squeals boringly in pieces like "Slasher Holocaust", but almost without exception the highlights here in the songwriting are all leads or melodies that outclass the rhythms. Drummer is pretty damn good, blasting and grinding with tenacity, though often at the expense of interesting beats or fills.

I doubt this debut was written with the intention of taking over the world...it's functional, fun and remains so almost a decade after its release, but I wouldn't place it past the first few Ghoul outings; more on the level of Splatterhouse's The House That Dead Built. The cover of the Misfits' "Devilock" is translated into a more potent, pummeling form reminiscent of the Frightmare originals, so its a worthwhile conclusion even if this treatment doesn't quite ramp up its energy level or impact. In summation, Midnight Murder Mania's a disc worth picking up if you're interesting in goofy goregrind, though it's not quite that intense. A more comic adaptation of Carcass, perhaps, or the usual Razorback crowd who likely need no introduction. A few stabbings short of setting serial killer records, but you wouldn't want to lock yourself away in a vacation cabin with a few friends if this was anywhere in a 30 mile radius.