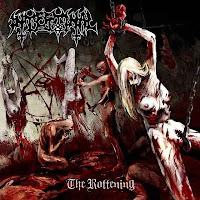 Swedish stormers Intestinal might not do anything out of the ordinary on their sophomore The Rottening, but they play the middle of the road rather well, honoring their obvious local influences while not clinging to the sound of any one in particular to the point that they sound balefully derivative. Funny enough, the cover is highly reminiscent of the earlier Cannibal Corpse works, and I half expected this to sound like Tombs of the Mutilated or Butchered at Birth, but it's got far more in common with Unleashed, Dismember, Grave, Entombed, perhaps even a bit of British brawlers Bolt Thrower in the crushing syncopation of drums and guitars or the loping, muscular grooves that are quite common through the songs.

They're using the vast tone you'd expect from their countrymen in the fields of death metal and d-beat, but they pour on a lot of raucous oozing tremolo lines that recall Left Hand Path or Like an Everflowing Stream. The riffs here are nothing remarkable in terms of their sonic sculpture, but all are pretty tried and true patterns that they vary up enough so the listener is never too bored. The Rottening is best when the band is laying it on thick, like the evil double harmony tremolo riffing in "Flesh for Living" that leads into this creepy, bass-driven segment where they just let these enormous chords breathe out. Unfortunately, the bass is usually relegated to playing along with the guitar, and it's not that distinct other than the album sounds very grounded and low-end. Drums have a splashy, lighter feel to them, but you can hear the kicks and snares quite well though the double-bass or blasted segments. It's obvious, though, that the guitar was meant to stand front and foremost with that flesh-blazing tone, a pretty typical trait for Swedish death records. This is another band that also seems to shy away from much lead work. Oh, they exist in small quantities (as in the song "Torture"), but I think a lot more ripping, squealing, brief flights would have rounded out the swarthy matrix of chords.

As it stands, the album isn't incredibly atmospheric beyond a sample, harmony or slower riff here or there. The vocals are a bit more brutal-edged than you'd expect of an L-G Petrov or Matti Kärki; instead, they've got more of an ominous, Karl Willetts nihilistic phrasing to them, if more gravel-gargling. Though it's not as dark overall, one of the band's this was bringing me back to Tormented, another Swedish group who had a similar approach to riffing on their debut Rotten Death. The Rottening is slightly less churning and morbid in flavor, and the note progressions not quite so excellent, but if you're seeking out more soil-churning, grave borne death metal that dwells within the parameters of its forebears. I was fond of the album after my first few spins, primarily because of the huge sounds of the guitar, but it lost a little luster after that. Anyway, The Rottening is competent enough, and fans of acts like Tormented, Ribspreader, Paganizer, Mr. Death or the German band Deserted Fear should certainly give this a whirl.