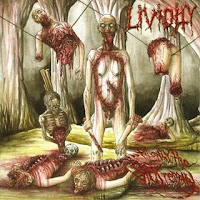 As common as this whole blood, cunts and semen schtick has become in the wake of Cannibal Corpse, Lividity can certainly hold claim to the title of Midwestern Maestros of Misogyny, because their music has long explored the themes of violence and pornography to a fault, and very often paired the two into an aural snuff film. Though the band had formed in the early 90s and pretty prolific that decade in terms of EPs, splits and deep underground live recordings, 'Til Only the Sick Remain was only their sophomore studio outing, following up The Age of Clitoral Decay from 2000. Lividity are honestly a band that has grown better with age, probably peaking with their most recent record To Desecrate and Defile (2009), but there is certainly an audience for their past works.

The obvious comparison is Cannibal Corpse here, with a similar momentum to that group's faster material on the first 3-4 albums, but Lividity manage to sound somewhat more than surgical thanks to that clean and thinner tone they use when nailing out muted tremolo patterns. These are balanced off with a lot of leaden, dense grooves that recall Obituary and their ilk, but once again pretty polished in terms of the mix. The vox fuse an irascible snarl with a deeper, toilet bowl guttural timber, not unlike Deicide but far more brutal and barbarian in delivery. All told, I would say that the riffs to songs like "Unrelenting Homicide", "Snack Size Tits" and "A Woman's Place is on My Face" are reasonable well structured, with a balance between the blasted elements and chugging breakdowns, and you can envision that their live sets went over quite well since they throw the pit more than a few bones. The bass lines and tone aren't all that impressive, but you can hear them rather well enough. The drums feel a little too sterile in my opinion, so clean are the kicks that I could grill and eat my breakfast off them...and there's isn't much atmosphere, but the band compensates by kicking up some intricate leads, and half-decent riffs that don't feel wholly derivative.