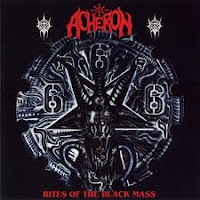 I've still got pretty vivid memories about Acheron from the earlier 90s, still in my teens, how they were supposed to be this totally evil death metal band attached to the Church of Satan who were writing some of the most insane shit out there. More than one acquaintance had made a recommendation of their debut Rites of the Black Mass, citing it as the most extreme thing since...Deicide. Once I was finally able to get my paws on the JL America issue of the debut, I learned better, because for all its pure intent and purpose, this album is actually quite unintentionally lighthearted due to the decision to alternate hammy, narrated ambient or symphonic pieces between each of the metal tracks...

Don't get me wrong, where it counts, this is a decent death metal effort with a solid old school tone, but it's hardly the harbinger of the apocalypse that I had expected. Bassist/vocalist Vincent Crowley was a former Reverend in the Church of Satan (and I mean 'former', he hasn't been involved with that scene for some time now), so the messages behind the album were influenced by Anton Szandor LaVey, and taken quite seriously by the author. Keys were provided by Peter H. Gilmore, another diabolist involved in such circles, and you've got the requisite Enochian Key-like chants (some Latin, some English) which sound as if they've been pitch-shifted down. These are probably the cheesiest thing on the album; even if you get used to them after many repetitions, they still render the Satanic themes into something of a cartoon cliche, and ultimate negate some of the menace Rites might have otherwise attained. Coupled with the pretty average Luciferian praise in the lyrics, the album doesn't read as if it's got much more depth than Venom or Deicide, it just sort of wears its concept boldly on its sleeve and then never does much interesting with it...

As for the intros and interludes themselves, I rather enjoyed the the mixture of infernal organs to a more perturbing, psychedelic use of ritualistic or martial sounding synth pads that Gilmore brought to the album. There's a fairly stark contrast against the meatier, straightforward death metal content, but as someone who revels in old videogame soundtracks, formative ambient works and other atmospheric records I've got no problem with the lo-fi sounds involved. As for how they 'flow' with the harder tracks, that is certainly a bone of contention, for they rarely provide much of a compliment or transitory motion to the work as a whole. As a result, it feels more like an experimentation akin to Pestilence's Testimony to the Ancients and its jazz fusion interludes: consistent in of themselves, but not so much with the death metal content. You could play all 10 of these in a row and they'd give you about 10-12 minutes of apocryphal ritual horror you might have expected from a cult 80s flick, good for a gag, but they're not really necessary. I could picture hanging a speaker out my window and then trolling the trick or treaters and (especially) their parents with these, but I'm not exactly 16 anymore.

Rites of the Black Mass has since earned a bit of a 'black metal' tag, but apart from a few of the snarled vocals (which are likely more influenced by Deicide and Carcass), the association is nothing more than a thematic and lyrical one, since musically what we've got here is pure death metal with a few traces of doom relegated to specific riffs. I guess if we're to consider the Czech band Root black metal, then it's not such a big deal to speak the same of Acheron. Aesthetically, the two bands share a lot in common, but when it comes to the actual construction of the riffs, I was generally reminded of early Floridian peers like Death  and Obituary, or perhaps some Autopsy and Master. Very vile, simplistic tremolo picked sequences and chord progressions are used to good effect, but you can also hear a metric fuck ton of Hellhammer/Celtic Frost influence in pieces like "One With Darkness", where they churn out those deadened swaggering chords, or some Sabbath/Candlemass groove to "Ave Satanas".

There's quite a variety in terms of pacing and architecture, and all the metal cuts are decent, even if they were hardly unique in their day. The production isn't quite pristine, but it's decent for Morrisound in the early 90s. There's a slightly muddy tinge to the guitars which creates this potent miasma of darkness but holds up even when the notes hit higher registers. Lead passes are quite sporadic and creepy throughout, even when they risk a bolder melody. The bass is very much audible, plugging and pumping away with a fat Faustian tone, but it generally sticks to the same note patterns as the guitar. Drums on this were contributed by James Strauss, who has since gone on to perform with the Pennsylvanian band Sathanas in the 21st century; basic, charging rock rhythms complemented with a few double bass rolls, this record is hardly going to win an award for the extremity of the beats, but since it's not a very fast or complex creature, such weren't required.  As for the vocals, Vincent had a timbre comparable to Tardy, Van Drunen, or Reifert if a little more blunt and less grisly; again, nothing remotely unique, but there are occasionally some snarls, rasps, and  deeper gurgles to add another layer of repulsion, and Mike Browning of Nocturnus also shows up for some backing barks.

In retrospect I'm surprised to say that this is probably my favorite of Acheron's recordings. The band has meddled with other ideas and slightly altered its sound since the early 90s, but I find Rites of the Black Mass to bear an authenticity to its composition that is still pretty fun to break out once in a blood moon. It's nothing exemplary in terms of how they've put together the songs, but with 20 tracks (half intros, half metal) there is quite a lot to digest, and if you can get over the silliness of the narrator during the interludes then you'll find a kindred spirit to Slowly We Rot, Severed Survival, Scream Bloody Gore, Master and The Rack, only spiced up as if it were the soundtrack to some long lost Hammer Horror flick. It wasn't written or played for laughs, that much is certain, and though I have a healthy respect for The Satanic Bible and some of the philosophical motives behind it, I just can't help cackling at how over the top it seemed (and still seems).