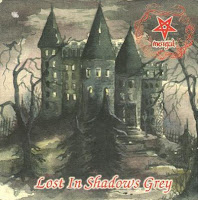 Morgul has got to be one of the least known Norwegian extreme metal acts to have achieved their level of visibility, had anyone actually been looking. With albums out on Napalm Records, Century Media and Season of Mist, you'd think that they would have stirred up some further conversation, but I am hard pressed to find more than a handful of souls who have actually fucking listened to them, or even heard the name... It's honestly a shame, because most of  Charmock's (aka Jack D. Ripper) tunes are honestly quite good for what they are, and Morgul is probably the only Norse band of those early-mid 90s whose interest was strictly in promoting horror concepts through the genre, as opposed to the usual paeans of mythology, sacrilege and Satanic self-empowerment so common among peers.

Granted, black metal is the means to Morgul, and not the ends, and various of Ripper's albums have forayed into realms of industrial, Gothic and symphonic music. Even this debut, Lost in Shadows Grey, has a lot of riffs molded in a pure Black Sabbath vein (like in the bridge of "Hunger of the Immortals"), so that one could make a black/doom argument and not be far from the mark. Like a more Gothic structured, less psychedelic precursor to Furze. It's easily the most primitive of the project's discography, with really raw guitar tone that seems little more than at the demo level, but I have to admit I enjoyed the fuzzy honesty. The keys are incredibly cheesy, from operatic choir pads to the almost John Carpenter-like intro to "Enthroned", they're almost constantly being used to enforce that haunted castle atmosphere of the cover artwork. Jack also uses understated acoustics, samples of wolf howls and other predictable atmospherics, and very impressively, performs all of the instruments himself. And while the bass is not really important here, and his black rasps are status quo for the genre and not all that significant, he's admittedly not a bad guitarist, piano player or drummer.

Overall, the album does not distinguish itself very much in terms of individual riffs or songs, but functions more as a primal span towards fundamental gloom and morbid, rustic and antiquated European horror. There are a good variety of riffs, from the aforementioned Sabbath-like grooves to the faster paced tremolo lines, but nothing really incendiary like what Emperor or Immortal were pulling off around the same era. The tracks are quite long, and there are only 5 of them, ranging from about 7 1/2-9 minutes, but the journey is 100% consistent through its many contrasts, and you feel that solitary, fell grandeur for the full 41 minutes. I love the swarthy symphonic sequences like the opening to "My Bride...", despite their lo-fi nature, and you get the impression Charmock could damn well have written a number of albums in the vein of Mortiis' 'dungeon synth' style and I probably would have bought every one. On the other hand, I'd be damned to actually pick out a particular track as a favorite, the quality is very level throughout and though structured well, there isn't anything here which is novel or unique enough to really rush back to.

Despite the grandeur Charmock was aiming at here, Lost in Shadows Grey manages to avoid any sense of pretentiousness, thanks to the very down to earth production values. I'm sure there were about a thousand black metal demos in the mid 90s which sounded exactly like this, exploring the campier side of the genre, but I have to say I'm just a sucker for the sound. It takes me back to a place well before that scene really burst open, even though the album's chronological placement was not so early. The crudest of Morgul, no doubt, but still worth hearing, especially if you're a fan of records like Old Man's Child's Born of the Flickering, Dimmu Borgir's For All Tid or Satyricon's Dark Medieval Times. An appreciable gloom to accompany that next cup of tea on some misty, morose, overcast afternoon.