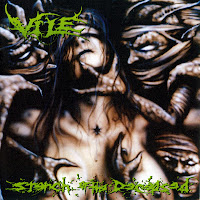 Though Vile was well ahead of many of its 21st century Californian brutal death brethren, that state having become somewhat of a mecca for the style in the past 5-6 years, they still haven't quite made their mark. Even with a presence on some of the genre's better record labels like Unique Leader and Willowtip, I've never heard a lot of chatter about them. I think the issue's always been that, as talented and balanced as most of their output is on a technical level, their songs almost always feel like a piecemeal reconstruction of their various influences, whether on the Floridian (Death, Morbid Angel, Malevolent Creation) or New York (Suffocation, old Cannibal Corpse) side of the equation. That's not to imply they aren't pretty darn good at it, because they actually are, and in fact I'd say their first three records are all well worth checking out if you're into the sound.

Stench of the Deceased was the band's self-released debut, with another great Jon Zig cover (the guy's taste in women is apparently on par with his taste for the undead), but interested parties will instead wish to track down the 2003 Listenable re-issue, which features some solid sounding live recordings and a demo track to boot. Already, after only a few years' existence, the band had a strong sense of professionalism in how they presented themselves in both songwriting and production. This isn't quite so spit-polished as you'll hear in a lot of modern brutal/tech death (to the benefit of some fans, and the dismay of others), but you can really make out everything pretty evenly, from the deep-sprung bass lines to the Corpsegrinder-like belched guttural vocals to the balanced, proficient drumming. The guitars have a load of dynamic range, and there's ever the slight sense of 'progression' in how they composed their tunes. Though there are more than enough balled-fist, lumbering juggernaut rhythms for the anger management sect to get their mosh on, there are plenty of more 'musical' moments, not the least of which are the great, spurious and otherworldly lead guitars.

It doesn't take a long while for Vile to 'sell us' on themselves here, as they exhibition almost the full range of tactical variation on the first tune "Abort (The Fetus)", and then proceed to mix it up throughout the remaining 29 minutes of Stench originals. Lots of Cannibal Corpse-like trilling techniques are implemented, as well as dual grunt/snarl vocal harmonies circa Deicide, and the pacing alternates between uptempo flurries of thrashing force ("Severed") to prog-death patterns like those in "Surgery" that wouldn't have sounded out of place on Death's Human or Atheist's Piece of Mind. Meanwhile the bass drums continue to batter along like extraction machines burrowing beneath a graveyard, and there's always a good handful of riffs involved in each particular track that keep it from becoming monotonous. If there's any flaw, it's that a few of the breakdown elements were insipid and uninspired by comparison to the more hectic, choppy riff patterns, a fault I often found on death metal debuts through the mid to late 90s.

Otherwise, while it's not the best of their albums, Stench of the Deceased is certainly a well rounded effort for the Californians' first time out, and it instantly transformed Vile into a 'player' on that post-advent-of-Suffocation circuit here in the States. These guys deliver live just as much in the studio, and they really were a 'complete package' sort of band. The lyrics are pretty average, similar to early Corpse, but they do their job in snaring you into the murderous impulses of their subject matter. Never content with just hammering away relentlessly on the same few notes, the compositions show quite a lot of effort, even if they don't ultimately establish an identity of their own beyond their influences. A good disc, though I think Depopulate and The New Age of Chaos might make better starting points if you're interested.