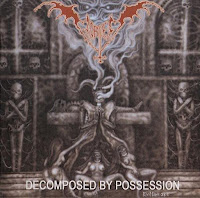 They say all's fair in love and war, but if the painfully unsung career of Peruvians Mortem is any indicator, the same cannot be said for the realm of extreme metal. These guys have hands down been one of the finest South American death metal acts I've ever come across, and yet they continue to languish in obscurity while others soak in the spotlight. For example, I'd say I enjoy the four Mortem full-lengths more than almost anything by Krisiun; they might not be as fast and blast-based in terms of how they construct their music, and obviously haven't had the touring and larger label support to back them up, but there is something sinister, repulsive and daemonic about their music which never loses its ominous luster no matter how many times I listen through it...

Perhaps it's most accurate to think of Mortem as a direct South American upgrade to the sounds pioneered by Slayer and Possessed in the 80s. Loads of hyper tremolo riffing contorted through bold, thrashing and drudging evil chord progressions that feel incredibly bright and bludgeoning in the dense mix. Perhaps the most frightening aspect of Decomposed by Possession, their third album, is the vocal performance of Fernan Nebiros, who basically takes that soaked, murderous timbre of Jeff Becera to an entirely new level (think if Jeff's tone was sauteed with some Martin van Drunen). Some of the sustained screams and growls in cuts like "Death Rules Supreme", "Incubus: The Return" or "Blackest Funeral" are just intense, and while one might think they could threaten the rest of the instrumentation with their overwhelming antics, the crunch of the mutes is loud and pummeling enough that it maintains control of the ghastly festivities. Drums are a bit tinnier, though you can really feel the kicks on the double bass sections, and the bass, while not incredibly unique or distinct, is at least pretty obvious. Special attention must go to the leads, though, because they rip off across the ceiling of this jungle like wild, blazing bats colliding into one another.

While I wouldn't dub Mortem 'technical', per se, they're quite adept at setting up more than just your basic riffing patterns. Tracks like "Morgue Rapist", "Blackest Funeral" and "Devilled" reveal a penchant for some threatening melodies, a clinical thrash influence circa Testament or the first Pestilence record, and truly harrowing, blitzkrieg drums that are constantly blossoming belligerent fills into the propulsion of the note progressions. They'll even throw out a lumbering groove or two, like the riff that opens the title track, or a few seconds of ritualistic atmosphere ("Noctivagants") to ensure the record's dynamic range. No boring, monotonous blast-fests to be found anywhere, this lot is well versed in musicality and there's almost always something new waiting around any corner on the album; plus it just feels so fresh and in your face due to the rather raw volumes of how the instruments and vocals are mixed. Even the lyrics are solid; not exactly unique or conjuring up the most complex of images, but simple and effective sagas of graveyard lust, occult rituals and unholy resurrections worthy of the profane cover image.

Stylistically, not a huge departure from the second album The Devil Speaks in Tongues, the main difference would just be that the guitars have more of a blunt, beefy edge to them, and the mix is overall not so even. But therein lies a lot of the charm to this, and it's ultimately well worth owning if you've an interest in such obscura. The band sounds old school and punishing without being overly derivative, and whether your cup of poison flows with Asphyx, Pestilence, Possessed, Sepultura, Vulcano, Morbid Angel or Mutilator, you'll likely enjoy anything this band recorded from 1995-2005.