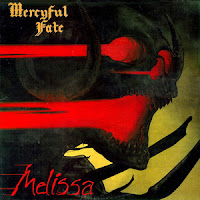 Perhaps the only tangible quip I could launch against Mercyful Fate's seminal debut is that, compared to the King's next six full-length records (from both Fate and his solo band), I hold Melissa in somewhat lesser regard, owed largely to the fact that the sum songwriting is marginally less infectious. Just about every stylistic die had been cast here which would serve Kim and his companions for decades hence, but in terms of sheer riffing stickiness and atmosphere, this album just doesn't have the same gallery of chops and leads as its successors. That being said, this album still deserves the forklifts of accolades dumped upon it, because Melissa remains one of the highlights of 1983. One of the better overall European metal records of the earlier 80s outside England. Heck, apart from Don't Break the Oath and the band's more divisive reunion disc In the Shadows (which I happen to favor, others not so much), it's probably the one mandatory purchase in their discography.

Melissa was actually my second exposure to Fate, having first bought the sophomore at a young age, and I admit it was underwhelming at first, if only because I had enjoyed the other tape more. But not only does this debut age well, it has managed to never accumulate much dust on its surface in going on thirty fucking years! Melissa still feels fresh and innovative, a more complex offering than what most of the group's British peers were capable of writing at the time, and also a hallmark of strong production values and deft musicianship. It might have taken time for some to adjust to King's eery and unnerving falsetto shrieks, which he lays on pretty thick throughout this, but there is no debating the amount of effort and professionalism in the compositions. Thomas Holm's cover art is remarkable, a screaming skull that bleeds hellish red light and gives a sense of sheer monument. The lyrics are maniacal blueprints for many themes Diamond would later flesh out in both his bands, with an emphasis on history, archaic horror, and occult topics fundamental to King's later pursuance of LaVeyan Satanism.

Pacing and production are key here, integrating the critical moments of atmosphere with the thundering, primal speed metal melodies and swaggering grooves that would come to define the group's sound as it supported the chilling vocals, which in metal music had simply never gone so 'over the top' without losing the gravity and impact of their subject matter. I realize that many outsiders to the band's sound, or power/heavy metal screamers in general (Halford, Dickinson, etc) must immediately find this vocal inflection comical in nature, but there was never anything remotely 'funny' about Diamond on these old Mercyful Fate records, he was a shrill specter that I took quite seriously even if I had to adjust myself to this timbre as the primary vocal tone. He's got his grittier end, mid range register also, but it's not quite so distinct. I wouldn't say that the melodies he summons up here are nearly so unforgettable as those he'd weave in later to several of the King Diamond concept albums, but for '83 this was pretty damn ambitious even when you placed it up against a record like Piece of Mind, Bark at the Moon or Balls to the Wall.

The instruments also sound stunning, with the better balance and clarity than the band's eponymous 1982 EP. Kim Jensen's drums are loaded, with a nice slap to the snare and some great reverb to the kicks that really measure off well against the guitars, though the cymbals and hi-hat seem a fraction more muffled. The bass lines are enormous and muscular when needed, like the close of "Evil" where the guitars remind me of the primary riff in Survivor's "Eye of the Tiger" before that charging power metal finale; but Timi Hansen also slinks along with a creepy class through the record's more atmospheric climes. As for the guitars, they are just beyond compare, with an effectively chunky fiber to them that allows the looser, glimmering leads to wail and writhe above and really stand out. They're also incredibly busy here, constantly twisting and turning into some new 'banger of a riff and really controlling the tempo for King's lyrical tales. The leads are usually quite brief through the album, but none of the notes seem misplaced, and I'd rather a band give me some spikes of emotion and harmony rather than indulge themselves to the detriment of the songwriting.

"Curse of the Pharaohs" is a real bruiser, and one of my all time favorite Mercyful Fate tracks, but I'd have to give "Black Funeral" the pick of the litter, a thundering and frightening piece where King's voice and the triplet rhythm collide in a moonlit, haunted tower. "Satan's Fall" is the most ambitious in terms of its length and construction, with an opening segment that feels like an occult "Immigrant Song", and some grimy and shuffling riffs deeper in which are among Shermann and Denner's most inventive (Jensen also shines here with a few cadences in the bridge). That said, there's nothing here which even hinges on 'bad'. Pieces like "At the Sound of the Demon Bell" and the bluesy "Melissa" itself might not resonate with me as much as "Gypsy", "Night of the Unborn" or "A Dangerous Meeting", but they're all well written and stuffed to the ghastly gills with conscious effort and variation. Fuck, I listen to these songs now in 2012 and they still don't give me any impression of becoming 'dated', though as a huge King Diamond nutter I'm understandably biased.

No, it's not the eeriest record in the Danes' lexicon, but along with the rest of Diamond's works from '84-'90, this is well worth breaking out for another Halloween spin, since it's lyrics and concepts of witches, Satan and the restless dead make a great accompaniment to the aesthetics of the holiday. Granted, there's nothing so obviously cheesy or 'haunted house' here like you'd find on a Cradle of Filth disc, but instead more of a bite out of classic horror antiquity, a spiritual celebration of black/white films with Lugosi and Karloff. Like Dracula, The Wolfman or The Mummy is to nearly a century of film scares, this record serves as an aesthetic monument to its medium. How many heavy, power, speed, thrash, black and doom metal acts owe so very much to Mercyful Fate? The answer would be next to incalculable, so I'll just stick to 'all of them' and you can mark your own exceptions to the rule.