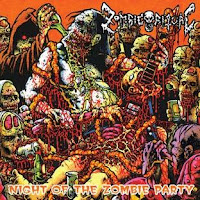 Even if I'm a little jaded on its 'subject matter', and have been for some time now, Night of the Zombie Party looks like the sort of album I'd enjoy even before hearing a single note. The gruesome, colorful cover art fits in well with the Razorback themes of camp and horror. I'm quite a sucker for many Japanese acts, and the decision to use the actual word 'zombie' in every song title seems a direct tribute to their countrymen Metalucifer and their 'heavy metal' fixation. Musically, I was expecting that brand of goofy, gory death, and grind that dominates this particular US label, and thus have been surprised at, in spite of its own silly and childish characteristics, there's quite a lot of depth to the riffing and a genuine overall effort in the songwriting department.

Yes, to some extent this sort of death/thrashing with over the top growling and snarled vocals is in that same post-Carcass niche that spawned Ghoul, Impaled, Exhumed, Splatterhouse, Blood Freak and so forth, but Zombie Ritual are quite heavy on the thrash element, mixing up some serious guitar progressions in the vein of anything from Slayer and Possessed to Kreator and Destruction. They'll occasionally break out into a D-beat styled rhythm ("Zombie Party"), or experiment with some jangly discordant patterns ("Zombie Axe Massacre") or traditional heavy and speed metal licks, but very few of the tracks could be dubbed pure death metal with the exception of maybe "Zombies Devour You Alive" which structurally bears comparison to the classics of Death or Autopsy in the late 80s. What floored me is that, while there are clearly a lot of derivative cycles being performed throughout the debut, that quite a lot of creativity has gone into specific riffs, often strangely melodic or eerie in nature, but well written overall. Thus, far more of the songs stick than falter, and it's easily competitive with the other Razorback acts of the time like Ghoul and Splatterhouse.

If anything holds me back from truly loving Night of the Zombie Party, it's probably the vocals, which are a pretty standard concoction of brute, gargled gutturals and sneers which have no distinguished character of their own. Granted, as soon as you LOOK at this album, you know how the singing is going to sound. They don't exactly rock the boat. But at the same time, while competent, they fail to stand out over the far more interesting riffing variations. Occasionally they'll throw in some outside element like kiddy inflections used as backups, but not really enough through the 12 songs. Otherwise, the production of the record is quite good, with meaty guitars, balanced, furious drums and a loud, bombing bass tone which helps extract some of its more interesting lines from the voluminous guitar. It's never too tidy or clean, but certainly on par with the other bands of this sort which I've listed above. The lyrics are all about...zombies, usually from the first person perspective, and of course transforming the attached terror and pathos into desensitized hilarity, with the requisite Engrish loss in translation.

Fans who have invested loads of love and intention into records like The House That Dead Build, Death After Life, Splatterthrash, Slaughtercult or maybe even other psycho Japanese thrash bands like Fastkill will probably derive the most enjoyment out of this album. Most of the members hail from other extreme metal acts like Magane, SSORC and so forth, but I have to wonder: if they shook the Walking Dead Have a Kegger gimmick, threw in some more memorable vocals and kept that intense level of business and creativity to some of the thrash riffing, how remarkable they might actually sound. As it stands, I enjoy the album even with the comic elements, but I'd almost say the musical composition deserves more.