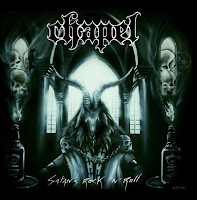 I'm all for bringing back the old school sounds and reliving the pioneer years of metal music, even 'blackening' them with harsher vocals, but the issue a band like Canadians Chapel faces is that its riff selection is too immediately bland to really leave much of any impression. Consider that this band's prime influences like, Venom, Bathory and Motörhead were mastering all of these chains and leathers 30 or more years ago, and Satan's Rock 'n' Roll is just bringing too little to the table. You could take a lot of these very basic, primordial speed metal and rock chord progressions the band implements and very easy change up the notes, layer in some dissonance, some atmosphere, or unexpected patterns, but alas this debut plays it far too straight...and far too safe.

Now, I don't mind so much that the band's lyrical themes are a bunch of retread concepts about Satan, Hell, beer, Satan, blood, and more beer, because that's sort of what one expect in the black/speed/thrash party scene. Similar groups like Midnight and Speedwolf have been tearing up the road with a similar schtick lately, but Chapel are a fraction more bloody and bruising. On the other hand, they're not writing songs on the same level, just sort of cruising along with some fairly effortless chord schematics that do little than offer libations to records like Ace of Spades, Orgasmatron, Welcome to Hell and Exciter's Heavy Metal Maniac. The brash bark of the vocalist here reminds me a little of Cronos and with some of Mille Petrozza's mid-80s bite, but it doesn't have the same character or wickedness. The guitar tone is bold and raw, and the performance is pretty tight all around, but despite a few burning, bluesy twists, and some flighty speed punk passages, there's never much interesting happening that you can't hear coming a mile away. And a mile on this album is...practically the entire album...

The bass tone is swarthy, fuzzy and effectively repulsive, and the drums definitely ramp up the band's energy level to the point that I could never argue their enthusiasm, but overall it's not the production which hinders the Canadians. The lyrics are fairly minimal, but they read like a bunch of buzzwords, cliches, or song titles of their influences, and don't provide any genuinely fucked up, evil imagery beyond what you've already read from Slayer, Venom and just about every thrash, black or death metal band walking in their steps since. On a purely aesthetic plane, I dig what bands like this are all about, but Chapel doesn't take a fresh enough spin on the songs to add to the legacy they are beholden too. For some, that might be enough. Certainly this isn't a bad album that I wanted to hurl into the nearest wastebasket. I doubt I'd mind hearing their music in the background (stage or sound system) if I were drinking at some dive. Yet, for something so obviously inspired, it just doesn't sound 'inspired', it merely takes the blasphemous billy goat by its horns and rides its back into being. Busier and better, distinct riffs would make all the difference here. Even the title is all too obvious and average...and we all know Satan's real rock 'n 'roll is Jerry Lee Lewis.