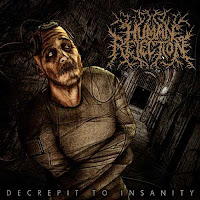 Though Greece will probably always be best known for its unique black metal scene in the 90s, or the atmospheric death elements manifest in groups like the indomitable Septic Flesh, they've in truth got quite a practiced and punishing pack of brutal death metal acts that are slowly but surely making a name for themselves. Human Rejection might walk a straighter path than their more progressive kin in Sickening Horror or Cerebrum, but their combination of lavatory gurgled vocals, which I generally associate with lower-end brutal/slam death, and hyper fits of incredibly riffing that constantly engage and entertain the ear even if there is nothing incredibly unique or novel about them. This is only a recent acquisition of mine, passed to me via a friend who has been getting me into a lot of obscure international death, but it's exciting to the point that I'm actually upset that the group has since parted ways...

'Ballistic' is undoubtedly the first word which comes to mind in describing this sophomore album, but Human Rejection do take a varied approach to pacing out its contents so that the songs are rarely too samey. For example, "Infernal Hostility" thrives off a lot of death/thrash bite before it bursts into its guttural hysterics, or "Demented by Self Declined" experiments with cadence and beats to the simple, chugging riffs. In fact, on the whole, Decrepit to Insanity has an incredibly level ratio of groove to blast, and an uncompromising balance of old school influences wrought into modern, tech-inclined punishment. There are plenty of low end chug sequences which will sate the slamming audience or the deathcore maven, but also a lot of athletic flair ups to the speedier segments that will thrill those who prefer the nihilistic volleys of Hate Eternal, Morbid Angel, or even Vader's faster, modern material. The one thing I was really missing from the formula here is effective lead-work. Some atmospheric, zipping melodies woven above the busied lattice of rhythm guitar would really have put this over the edge...considering the obvious skill of this guitarist, I was shocked at their absence. On the other hand, the drums and bass are fantastic, the latter getting to strut itself once in awhile with a noted fill.

I do realize the guttural toilet swish of the front man can grow a bit repetitive, but he does such a great job of it that I found myself mentally registering it as another piece of the percussion. The songs also do occasionally feel a bit inflated, often perhaps 30-40 seconds over their welcome (due primarily to the lack of great solos or other atmospherics to embellish the core riffs), but otherwise Decrepit to Insanity is a tremendous wedding of two gruesome extremes. Imagine the cleaner, crushing production of bands like Kraanium or Ingested if their songs were being sped up into manic extremes, with loads of riffs flying everywhere but still a tendency to bust out this palm muted mosh-a-thon. The album could use more 'dressing', so to speak, but those who don't shy away from the cleaner, clinical, modern age production so popular to tech or brutal death in the 21st century should find Decrepit to Insanity an incendiary, razor-edged pleasure.