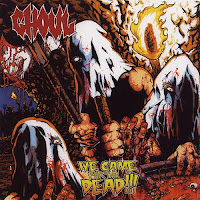 By no means a parody, We Came for the Dead!!! is like a mischievous little brother for Carcass's Heartwork, a chunky and abusive riff-fest which honors its overt British influence by stamping on an incredibly hammy and entertaining shock rock concept. Some will no doubt scoff at this band's underlying 'Creepsylvanian' theme of morbid, hooded serial killers steeped in campy Halloween horror and cult cinema, much like there are basement boggarts who will whine over Finntroll or GWAR  or any other costumed gimmick act (who back their image with appropriate music) while they fidget with the sticks/rulers wedged firmly into their rectums. Personally, I think this shit is amusing, and whereas the music and lyrics might resemble a good number of their Razorback kin, or the Californian act Exhumed, the fact that they've put so much effort into the cheap, consistent image of plaids, chainsaws and stage gimmicks, and created their 'own' horror story, rather than just endlessly cycle cult film samples as intros and lyrical inspirations, really earns a blood-smeared stamp of approval.

This was the group's first full-length after the Ghoul's Night Out demo (2001), and includes most of that material and a bunch of newer originals. While they weren't the first band necessarily to dive into this horror kitsch, or even the first on Razorback, they wound as arguably the band's biggest success story during that critical period in the early 'oughts when the label was emerging as an underground feast of imagery and 90s styled extremity, in stark opposition to the tech oriented Florida/NY styled brutality so popular elsewhere in the States. For good reason: We Came for the Dead!!! is not only chock full o'guts and riffs, written almost on the level of groups like Impaled and Exhumed (who some of these 'anonymous' characters have been involved with), but it sounds fantastic, and to think this is likely their 'rawest' full-length. Loud, crunchy guitars belt out hybrids of death and thrash/hardcore progressions, with a lot of muscle to the mid-paced chug, and plenty of airy, creepy leads to distract the listener from the rhythmic matrix. Drums have a lot of clap and splash to them, supportive of the guitars, and the bass does little other than pummel away the same notes that the guitars are usually spewing forth, but all in all it sounds really bright and entertaining when slathered in the mix of growls, snarls and sewer-ghoul which combined sound like an update of Symphonies of Sickness (albeit with a higher ratio of those lower, garbled gutturals).

We Came for the Dead!!! doesn't take as many liberties as its successor Maniaxe, which is a more varied album. You won't hear undead surfer tunes, just a steady barrage of organ-churning, aggressive riffs over blasted beats or thrash/rock rhythms. These are not complex compositions, but sort of cashing in on the whole retro thrash flavor while offering prostrate fellatio to Carcass, Impetigo and Repulsion. If broken down into individual riff patterns, there's nothing necessarily astounding or truly sticking to the ear, but when placed alongside the charismatic vocals and the occasional atmospheric bits, like the atonal organ ambiance that inaugurates "From Death to Dust", or the great Vincent Price sample that comes out of nowhere, it all wraps together into this mummified map of amusement. Occasionally the lyrics are self-referential to the characters the musicians have created, but usually they're about drinking the body fluids of rotting corpses, robbing graveyards and...collecting lots of cool dead stuff to decorate their crypts in Creepsylvania. It's aesthetically a hodgepodge of the Munsters, the Hammer Horror back-log, B-rate 80s slashers and a bit of Chris Barnes/Cannibal Corpse influence.

I have to say, as satisfied as I was that they got the guitars right in the intro, the additional cover of "Skull Beneath the Skin" from Megadeth's debut is probably my least favorite track here. They've done well to make it 'their own', but the riff progressions just don't match up with the Ghoulish frolicking of the originals, and so it seems a little tacked on. Otherwise, this is spot fucking on, with songs like "Tomb After Tomb", "Coffins and Curious" and the title track numbering among my faves in their catalog. I wouldn't go so far as to say this is a match for something like Exhumed's Slaughtercult, which is for me the album I rather wish Carcass would have written (before or after) Heartwork, but it's a loving spin on the tradition which does manage to best most of the other sound-a-likes. If you're into General Surgery, Carcass, Regurgitation, Impetigo, Autopsy, Blood Freak, or Impaled and you're not averse to the guys playing dress-up here, then this is well worth owning, and in my estimation nearly on par with its more quirky and unusual successor. In fact, I'd go so far as to say that these Ghoul two records, along with the debuts from Hooded Menace and Rogga's Revolting, comprise the very best I've heard from Razorback.