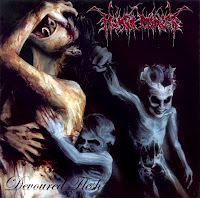 One of the finer Spanish death metal institutions alongside Avulsed and Machetazo, Human Mincer have seen a steady improvement thus far through their three full-lengths. Though the 2005 sophomore Devoured Flesh has little on its own successor Degradation Paradox, it was nonetheless a riffy, refreshing dose of decimation with dynamics in spades to keep even the more jaded extremists' expectations from growing dulled in its wake. Unlike their aforementioned neighbors, who possess more of a carnal Carcass craft to their sound, these Spaniards lunged into the faster-paced USDM side of things, inviting comparisons to acts like Morbid Angel, Suffocation, Nile, Cannibal Corpse and Deeds of Flesh with perhaps a tint of Decapitated and Krisiun.

This is characterized by an enormous display of kinetic, often hyperactive riffing which flows in and out of the band's choppy, brutal breakdowns, but most importantly, they're often writing (or at least attempting to write) some really catchy grooves or tremolo riffs which give the impression of a mashup of Morbid Angel's 1993-95 material. Vocalist Carlos Mejias has a guttural that integrates Vincent, Tucker, Rutan and perhaps Alex Camargo into an apt bludgeon which is even more potent when multi-tracked to beat in both your ears. The guitars are so rampant and acrobatic as they carouse through pinches, squeals, harmonics and sheer battery that the bass is often difficult to detect, but it's there if you listen just beneath the surface, and once in awhile curves out more boldly into the mix. The drummer David has to be one of the strongest in Europe at this style, with impeccable double-bass work, blasting on a dime, and great fills that are constantly up to the challenge of the explosive guitar progressions. There are only a few tints of atmosphere provided through the dark ambiance that inaugurates, say, "Devoured Flesh" itself, but the music is so incredibly busy that it adequately tucks the listener away into its envelope of fear.

The production is also quite high end here, with a level, bludgeoning mesh of drums and guitars that create this incredibly consistent vortex of confusion. It's not so polished as other unduly processed modern tech death records, but most of the instruments are clean, and the guitars have this great punch when they lumber into some spastic, mid-paced rhythm to set-up a volatile tremolo pattern. Seriously, songs like "Dirty Remembrances" and "Eternal Ways of Devil" are stunningly athletic and brutal, and any serious fan of groups like Hate Eternal, Morbid Angel or later Behemoth will shit him or herself in glee. Does Devoured Flesh present anything truly nuanced or intensely memorable? Perhaps not, since it's fueled by a formula common even by the year of its inception. And yet they've got this 'whole package' approach to the music that soundly balances musical proficiency and aggression into actual songwriting rather than some tedious display of their mutual prowess. A tight, beastly, effective outing, well worth the listen if you dig entries like Winds of Creation, Domination, Conquering the Throne or Conquerors of Armageddon.