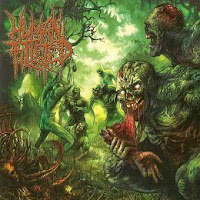 Though I thought the earlier Human Filleted records were decent in their own right, certain flaws in production and the fact that they weren't really lavishing anything distinct or interesting on the brutal death metal spectrum held me back from further admiration. More or less the same lyrics, song titles, gruesome imagery and sound we'd heard from about a  hundred other USDM acts through the 90s and earlier 21st century, and no sign of surpassing their peers in either songwriting or extremity. Both Hideous Sculptures of the Dead in 2008, and the belated Packaged Human Meat were nothing special, if nothing too shabby either. With their third record, the vile Indiana quartet decided to beat on us with what is perhaps their most accessible and entertaining album overall.

Blunt Force Embludgeonment doesn't entirely up the ante, but it both looks and sounds better than its predecessor, its gruesome and colorful cannibalistic ghoul scenery provided by the prolific Italian Marco Hasmann, whose credits include cover art for groups like Fleshgod Apocalypse, Beyond Creation, Vomit the Soul, and his own band, Blasphemer. This is a very percussive album, with a bucket tone to the kick and snare that isn't exemplary, but still better overall than Packaged Human Meat. Hyper pummeling crunch mutes are delivered at high velocity, lapsing in and out of old school tremolo passages, and the level of precision and polish here give me that 'live autopsy' feeling of punctuality and menace that some love and others hate in most modern, brutal tech/death. Human Filleted doesn't perform anything too perplex in terms of rhythmic dynamics, they just keep the riffs flowing below the guttural chug of vocalist Kyle Christman (also of Gorgasm). The punching bass lines are unfortunately not much of a selling point here, and the drop of a dime rhythmic transitions don't allow for much depth or dimension the music, but some of the faster old school riffs are definitely sinister and incendiary.

As for its production, this is not a massive leap forward, and still sounds quite amateurish when you consider just how processed and polished many other bands in this niche are, in particular that burgeoning California scene with groups like Pathology, Inherit Disease, Severed Savior and so forth. Those who hate that sort of modernist sound sculpting might see this as a boon in general, but probably not in this case, since the guitar tones have a fraction too much buzz, the clap-can drums lack character and there just isn't much of a robust low end to Human Filleted which allows the listener to really dig into the breakdown grooves. Christman's vox also border on the mundane and monotonous, so it was a good decision to feature guests like Damian of Gorgasm and Shaun from Putrid Pile to help vary it up like some Serial Killers Anonymous meeting. In the end, though, while Blunt Force Embludgeonment might inch past its predecessors and offer a few thrills for fans of Deeds of Flesh, Lividity and later 90s Cannibal Corpse, the lyrics and music of Blunt Force Embludgeonment are derivative of better albums, and it lacks the atmosphere, composition and engineering to make much of an enduring impact beyond its grisly exterior.