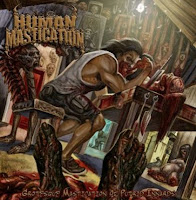 As fascinating as I generally find Asian metal, and as promising a future as that region of the world holds for the genre as a whole, there are also, like you'd find anywhere else, quite a lot of acts out there that can be reduced to mere mirrors of those that have come before them. In the case of the Phillipines' troglodyte slammers Human Mastication, and their second Sevared Records offering (the first a 2006 split with Singapore's Flesh Disgorged), the concept is more or less a stripped down alternative to the US act Devourment, which in of itself is devoted to shaving off the more technical and varied embellishments of pioneer pervs Cannibal Corpse, Morbid Angel and Suffocation into something far more mosh driven; clearly tainted by the influence of meathead hard- or metalcore which was always half audience perspiration to its other half: musical inspiration. For better or worse.

Like their primary influences, Human Mastication are not an all out slam-fest, incorporating some faster flights of colon rupture riffing and drums to help pace the overpopulation of breakdowns. They have a fair grasp of performing their muddied palm-mute rhythms, which are rarely more than re-interpretations of riffs the avid listener will have heard hundreds if not thousands times before 2008. My problem is simply that this music feels so uninspired. One could pick any random band of brutal death (or otherwise) metal musicians and write a dozen records like this in an afternoon. The guitar progressions entirely lack any sense of hook or adventurous nature, they're just chug after chug even when the pace varies, and there's very little musicality if one were to dissect them to their foundations and explore them without the drums. You'll hear a few dingy squeals, but with a lack of solid (or really any) leads of note, and a further lack of atmosphere beyond the bare necessities for windmill kicking and shoving other pit fighters to release some angst. The bass guitar is nothing more than a footnote (common in this niche), and the porcelain god bong-gurgling vocals are just too bland and commonplace, despite their ominous, murky drawl.

Granted, this sort of release has its place in a scene which has often become more about extremity and packaging than actual quality, but I see no reason why one couldn't write a damn good brutal/slam record which delivered both its testosterone quotient and some damn fine music! It can happen, and in fact, it has. See Kraanium, Ingested or Short Bus Pile Up for example of how bands can make such a cranial ache better worth the while. I could forgive Grotesque Mastication of Putrid Innards if its lack of ambition was overcome by some excellent, fun songwriting, but it's just too settled in its arbitrary, meandering sense of sameness and monotony with only those few tempo bursts to keep it from passing the precipice of utter boredom. Add to that the truly muddled, jam room production values and you've got a record which just fails to exit its starting gate, never mind crash and crush against its competitors in the demolition derby. It's not the shittiest shit-stain of a death metal defecation out there, but too little risk and effort reaps too little reward. I think they can do better.