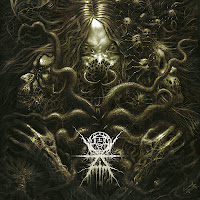 Though its musical structure inhabits both the death and black metal species which spawned it, I'd almost hesitate to limit De Masticatione Mortuorum in Tumulis to either category. Disturbing, experimental and almost wholly unwelcoming, Matron Thorn and crew have really written themselves something here that will paint the walls of sanity with the listener's cranial contents. This album is so fucked to filling that even with the prior awareness and experience of last year's Oracle of Infinite Despair EP I found myself absolutely mortified by the subterranean asylum at its core. Not only will the cover haunt you for months to come (easily one of the best I've seen this year), but its fragmented, dissonant aural entrails require numerous runs through to really acclimate oneself.

Those who have experienced Thorn's more storied black metal act, Benighted in Sodom will be well aware of how the guy thrives on atmosphere, and this record is no exception. Spectral ambiance, mourning wails and other glimpses of madness saturate the central, rhythmic clusterfuck, and the riffs are crafted in this muddied vortex of low end tone that you'd expect out of bands like Portal. Unlike the Australians though, who breed unease through the shifting patterns of drum and guitar alone, Ævangelist is more interminably vast in scope. Fucked up bass lines cavort through its sodden miasma of darkness, and the atonal guitar progressions writhe along like serpents and insects in the soil, devouring one another. There is no sense of warmth here, no positive emotional outreach, and no escape. This is music that gave up on life a long time ago and now revels in its butchered ugliness. Blast beats are broken into dissonant pauses, and there is very little 'conventional' to how even the album's basest riff structures feed into its maddening matrix. Songs will both drone and thunder along for periods of up to 9-10 minutes, but even though the sound-set of the guitar, feedback and other noise elements are cohesive throughout, I always felt like something there was something new around each corner, a fresh razor carving my ears out.

Admittedly, the guttural and snarled vocals, which are often wrought in unison, or nothing quite so unusual as the music that swallows them, but there are also these numbing, choir-like ambient effects and broken pieces of orchestration that help add a higher pitch to the mire of the guitars. The blend of these sounds with even the most recognizable and structured death metal rhythms (as in "Blood & Darkness") create something expressly psychotic. Clean guitars also exist here, like with the finale "Crematorium Angelicum", but rather than offer a hint of sunshine, they're molded in unnerving cycles that are just as chilling as the most repulsive, blasting material elsewhere. It's almost as if someone came up with the idea to combine the moodiest depths of depressive USBM luminaries like Leviathan and Xasthur with a filthy, warped interpretation of old school death caked in grime and torture. I felt that same sense of futility, loss and desperation. And it works all too well, an apple as rotted on the outside as its worm-infested innards. Sure, there might not be anything here you'll find yourself humming to en route to the cubicle or sonny's soccer match, but if you're in the market for some hazy, discomfited nightmare, pass on that next heroin fix and meet your new dealer.