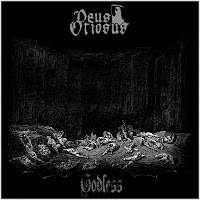 Danes Deus Otiosus released a fairly competent and engaging debut in 2010's Murderer, and here they follow in its footsteps with another bastard stepchild of the traditional death and thrash metal genres, and in doing so removed themselves from the most easily categorized retro airs that are in many case beginning to induce nausea since they've become so bloody trendy. Now, I understand that nostalgia is an important factor for all music addicts (including those who weren't around when a genre first developed), and it's 'cool' and I myself enjoy a lot of the bands who provide a loving and gloomy glimpse back into the authenticity of the past, but I'm almost at the point where another doppelganger of Left Hand Path, Severed Survival or Onward to Golgotha might shred what little remains of my sanity...

Thankfully, Godless uses old school imperatives only as a guideline and then forges its own path towards a grave and haunting introspection. The meaty, clear riffing patterns offer a hybrid of dark West Coast thrash like Slayer or Possessed and steadier death metal grooves from the 90s, threaded with tremolo picked passages that betray a hint of a Swedish black/death metal influence. Often there will be eruptions of more uptempo melodies you might expect of Deceased (as in "Cast from Heaven"), but they can also creep along with a cleaner, less crushing death/doom aesthetic. The vocals are blocky, brutal, gruff and dark almost like Jan-Chris de Koeijer on Gorefest records like Erase, with a more ominous ringing out at the end of lyric lines. Drums have a loud, crashy, pervasive tone to them which feels creates a very up front, live foundation for the atmosphere of the guitars, and though it's probably the least distinguished element in the music, the bass rides along hurriedly to the guitar progressions. They win points for getting such a clear production to still seem decidedly raw and lo-fi. These aren't exactly the simplest of songs, either, there's a lot of effort in the construction of the riffs and a wealth of variety across the 41 minutes.

There are some genuinely chilling or distinct tunes on the album, like "New Dawn" where they pair up a mournful clean vocal to the tremolo death metal guitar, or closer "Death Dance" with its swaggering, sepulchral bluesy struts in both the intro and bridge; but at the same time, there are a dozen or so guitar progressions here that didn't entirely blow me away. The leads are frenetic and fun, often using a wah wah effect to create a darker groove psychedelia redolent of the death'n'roll niche, and there are definitely points at which Godless took on a tone and atmosphere akin to Entombed's Morning Star or Wolverine Blues. All told, this was also a fraction more enjoyable than Murderer, and worth hearing if you like well scripted death metal with a difference to it, songwriting over brutality, etc. Fans of Dismember, Unleashed, Grave, Gorefest, Desultory, Necrophobic, and Bolt Thrower will no doubt appreciate it.