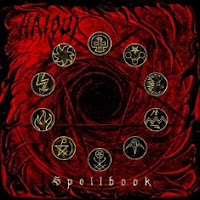 Haiduk's sense of unbridled velocity is made even more remarkable by the fact that this is all the work of one Canadian, Luka Milojica who competently executes each instrument and vocal like a pro. It's hardly a novelty to encounter a one-man extreme metal project in this day and age, but in general most of them tend to favor a baser, atmospheric sort of approach to the material, or at least succumb to an imprint of base rawness and simplicity. Not so for Haiduk, which is more like a fully formed, infectiously thrash-inspired death metal band moving at rabid speeds. I had half-expected a more ritualistic, occult environment with either synthesizers or other embellishments, but this is very heavily a riff-based monstrosity which pursues a clear path to punishment.

I suppose the aesthetics on parade throughout Spellbook are most redolent of those 'blackened' death metal acts out of Poland like a Behemoth, Hate, but there's a frenzied, electric post-Slayer playground to many of the riff sequences which reminds me more of Vader (Haiduk's logo even seemed like an italicized alternative to the Poles' own). However, the frenetic tapping and looping melodic cycles that Milojica is constantly airing out over the certainty of the rhythmic force take on a more frantic, technical visage redolent of something like Nevermore in cuts like "Stormcall" or the hyperactive "Lightning". The drums aren't the most dynamic or unique, and the beats are rarely more than a support system for the speed and tension, but to the album's credit, they're powerful and perfectly in step to the same sense of celerity. Slightly less impressive were the bass lines, which never seemed to take risks, or the monotonous grunts, which are percussively fit but just don't evoke much agony or interest. No, Spellbook is a guitar album, and Milojica' acrobatics in that particular stratum were more than enough to carry me through the 32 minutes of ten very concise tunes.

Granted, they're not the stickiest of riffs in terms of melodic connotation, and perhaps individually broken down they're far from unique, but the deftness and precision with which they're rifled through help keep the ears attracted to where the songs are going, in particular pieces like "Tremor" and "Vortex". The leads do often feel as if they're just 'techniques' being exploited, and not the climactic, emotional adventures I generally appreciate. Haiduk does not generally tend to incorporate much variation in tempo through particular tunes, but there are points on the album like "Lich" or the closing of "Vortex" where he plies out slower, more cautionary, exotic guitar lines that weave a necessary contrast against the thrust of the riffing majority. I also thought the minimalist choice in song titles and lyrics gave the album this sort of feeling that I was truly experiencing some lexicon of the arcane, conjurations of wind and fire and other hostile magics that were reliant on correspondence and force rather than subtle enchantment. Spellbook really is a 'tempest', and duly impressive for shucking expectations and showing no dearth of effort in its composition. The project could benefit from a more dynamic vocal inflection, and a handful more rhythmic segues, but even then this is a damn solid debut and I'm not sure what could stop this individual as he continues to develop his sound...