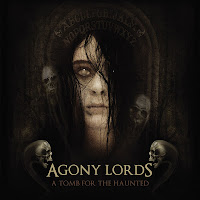 Though the Agony Lords were first formed nearly 20 years ago, and put out a pair of albums in the 90s, this is actually only my first exposure to the Mexicans' rather unique brand of melodic death metal. A Tomb for the Haunted is coming after a few years of reformation beyond the hiatus they took last decade, but it's such a seasoned effort that it must sound as if no time has lapsed. Contrary to the extreme end sounds I'm used to from this country, like crushing cavern death mavens Denial, veterans Cenotaph, or the wildly chaotic black/death of Hacavitz, this is more of a traditional heavy metal fueled sound using harsher vocals; and what I enjoyed most about the disc is the sort of parallel evolution it represents from other bands who pursued a similar path in the 90s...

Don't expect the spastic positivity of Scandinavian dual-melodies circa the Swedish heroes, these guys play a bevy of rock solid riffs rooted in straight old doom/heavy metal, but with more of an uplifting sense of melody carved into the chords and rock & roll leads that erupt throughout. I could make comparisons like a 'happier' Paradise Lost, or a Central American alternative to the Amok-era of Sentenced (the vox redolent of Taneli Jarva's performance there) but these wouldn't fully do the album justice, because it really is its own thing. Thick, thundering guitar progressions amply balance a kinetic momentum with granite tone, over which the emotional leads wail off into the atmosphere. Bright chords are used in pieces like "Emily" to create an almost 80s DeGarmo/Queensryche feel only slathered in the hoarser inflection of the vocalist, and haunting feedback and riffs are often imposed by the guitars to carry the darker subject material. The drums and bass have a very livid, rock feel about them, and this accessible foundation helps create a clarity for the listener that you don't often experience with more brutal bands. There's also a pretty wide variety of riffs, each song written to provide a distinct experience from the rest without losing aesthetic cohesion.

I'd say the album isn't quite so oblique or spectral as the cover might imply, but there's no rule that horror based bands need implement the most crushing or dissonant of sounds. Some will also have a hard time dubbing this 'death metal' as they do with a band like Deceased or mid-period Sentenced. But semantic quibbles aside, they stand out instantly due to just how refreshing they feel against the backdrop of trends that grow tiring with over-saturation. Agony Lords focus very heavily on the songwriting, and they're pretty strong at it. Not that A Tomb of the Haunted is stuffed to the gates with the most memorable compositions out there, but I found myself revisiting pieces like "Raising the Occult", "The Tree of the Hanged" and the titular finale and repeatedly enjoying them. Call it what you must in terms of its genre classification, but this is a good comeback for a band that probably should escape the obscurity they've so far existed in, and if you seek a melodic/death record with a clear difference from the heaps of At the Gates/Dark Tranquillity clones that usually clog this creative drainpipe, you've just found it.