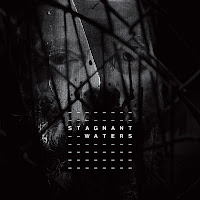 Franco-Norse collaboration Stagnant Waters have chosen what is perhaps one of the more ironic band names I've encountered of late, for if there's anything this debut album isn't, it's in any way involved in the process of 'stagnation'. Granted, there are precedents to the sort of manic mesh of black metal and industrial aesthetics that dominate this unhinged lunatic asylum sound. Names like Dødheimsgard, Aborym, Thorns and the latest works of Abigor come immediately to mind, but Stagnant Waters do not necessarily treat their mutated sound in quite the same way: there's less of a sense of 'control' or construction here as a sense of chaos flooding the listeners' perceptions to the point where it might damn well drive you mad, or madder as the case may be.

Take, for instance, the first track here "Algae" which presents a barrage of noisy, dissonant and strangely melodic black metal over caustic blasts and then, within the first minute, manages to devolve into a void of faint chiming percussion and rushes of distorted glitch, then back again, and then picking up into this monstrous, mechanized beat somewhere between Ministry and Meat Beat Manifesto, drowned in an unfeeling, robotic vocal glaze. This sort of juxtaposition of unsettling calms and all-out, brazen assaults upon the senses continues through the remainder of the 46 minutes, and though it can often grate on the nerves due to its lack of supporting structure, I promise you that it's never boring. In fact, some of the record's most interesting moments come deeper into the track list like the disheveled, magnificent 10 minute epic "Axolotl" or the pummeling nightmare finale "From the Breaking Neck to Infinity", a shattered vision of dysfunctional electronic glamor and sanity-stabbing mayhem.

But be warned! Even at its warmest ("Castles"), there is nothing inviting or accessible here for the saner audience. The tracking of the splotchy, acidic guitars and the drum beats are quite raw in presentation, and the vocals a splice of incendiary blackened rasping and hoarser shouts courtesy of Svein Egil Hatlevik (Fleurety), no stranger to the uncanny blend of aural fragments on exhibition here. The palate of noisy, glitched synthesizer elements runs from primordial 90s industrial circa Skinny Puppy to a more chiptune feature-set, and about half the metal chord blitzes on the album feel like you're flossing with a spiked chain. There are even what sound like blaring, noisy woodwind instruments here ("Concrete") that enhance the sense that, no matter what, Stagnant Waters is fucking with you. Ultimately, how well you'll be able to process their incessant tirade of aggravations will go a long way to your appreciation of this eponymous debut. If you can imagine and salivate over a hybrid of Thorns and John Zorn's Naked City, you'll want to sink your teeth into this until your gums are bloodied.