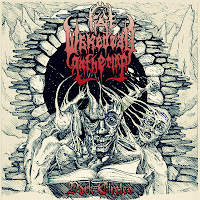 Cincinnati crypt keeper The Wakedead Gathering (aka Andrew Lampe) left a reasonable impression upon me with his 2010 debut Tenements of Ephemera, which had him well on his way to becoming another A-lister of the throwback death metal scene here in the States, and to that end, its successor, the Dark Circles EP does not disappoint. There's nothing new or original happening here, perhaps, but what I appreciated with the debut, and again here, is how central the songwriting is despite the levels of atmosphere Lampe manifests through the backing melodic subtext. Where many projects are content to just drudge along in the footsteps of their influences with dime-a-dozen riffing patterns, there is not one misplaced or uninteresting sequence throughout these six tracks which withdrew me from the experience. Not once did I glance at the clock through a good number of spins...

I love how the very base, primitive guitar tone here is so chunky and clean, whether it's swaggering along in a more death/doom configuration or a surgical death/thrash pattern ("Dark Circles" itself). Then he'll add these subtle, glimmering, echoing phrases in the backdrop which add such depth, dimension and definition to the songs. You're never really just left with one boring, drawling progression of notes to attend you. Songs never exceed their grasp, and chugging, slower segments are interspersed with uptempo breaks that never disintegrate upon transition. Tremolo riffs are pure old school 1988-1993 but usually menacing and catchy as I enjoy them (Scream Bloody Gore, Malleus Maleficarum, etc). The vocals are nothing unusual, reminding me of a mix of old Swedish garbled grunters like Dan Swanö with Chris Reifert of Autopsy. Dark and steady. The bass here wasn't much of a factor in listening, but the drums were pretty well balanced with a live-ish feel to them that doesn't feel over tracked or over edited. In fact, overall I feel like The Wakedead Gathering could pull off a very close approximation of this sound in the live setting, a boon for fans who disdain the highly polished studio output of many more technical death acts.

When Lampe pulls off some fell, glorious, saddening phrase (like the descending melodies in "Inhale the Eclipse"), the music becomes truly captivating and atmospheric to the point that I wish so many more of these retro death metal stylists would pay heed. Dark Circles isn't merely brutality for brutality's sake: you get a feeling that this act is meant for more straight from the ritual intro to the EP. It's an actual feat of composition as opposed to arbitrary piggyback riding on the popularity of these old, morbid, flustered aesthetics. Granted, when I pull apart the pieces, it's not exactly unique. The Wakedead Gathering does not sound overtly like any one of its particular influences, but a celebration of dozens of them, and unafraid to embellish itself in more accessible ranges of melody despite the negative connotations this might provoke from neanderthals who covet the genre. In the end, I found Dark Circles even more captivating than its predecessor, and alongside other newer acts like Horrendous, Sonne Adam and Morbus Chron, Lampe is proving he's got so much more leg to stand upon than many of the tired rehashes in this niche.