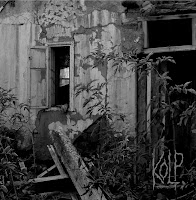 When I was first reading into The Outside to prep my review, I was struck, as usual, by the promotional description of the album as a hybrid of traditional and adventurous black metal aesthetics; in particular the latter adjective. For when listening through Kolp's sophomore, I found almost nothing outside the box, but rather a stripped down, lo fi brand of Scandinavian-influenced mourning with a lot of texture delivered through simplistic riff structures, thick and distorted bass lines and agonized rasps of intense suffering which sound almost like someone clutching an open wound in a street gutter and begging a pittance from passersby. Not to say that the music's lack of novelty cripples the disc, but it's certainly not taking a lot of risks.

The relative minimalism of the duo's composition is highly redolent of acts like Darkthrone, Burzum and a few more modern artists like Khold or the Greeks Sad and Nocternity. Each riff speaks for itself: a caustic faster paced pattern of chords glazed in emptiness here, or a slower, lurching monolith of eerie dissonance there, you get a fair balance of tempos. The aforementioned bass lines are often the center of attention in a few tracks, oozing along to provide a transition between guitars, and the drums shift off between moderate blasts and sodden, broken beats for the more spacious, draining sequences. These guys are fairly adept at incurring both depression and desperate majesty in the guitar progressions, but there is rarely much going on beyond that central, driving riff. You'll either love it and find yourself captivated by the configuration of chords, or become frustrated at the rather dry and one-dimensional approach to songwriting. I was at times reminded of either Immortal or Enslaved's mellower, old school riff styles, especially in its wintry overtone, but Kolp never reaches that level of intensity. This is more of a slow, grueling, measured experience.

The vocals do not focus so much on a venomous, hissing snarl associated with much modern black metal, but more that wasteful, suicidal form of torment originally wrought by Varg Vikernes. Even if the individual songs vary in speed, the distortion on both the guitar and bass never really lets up here, so you won't find the glittering tints of acoustics or other atmospheric. As for production, its admittedly murky on a demo level, but the simplicity of the writing helps to compensate for this fact, and you can make out each of the instruments distinctly. The general architecture of the music breeds sorrow and reflection, but it's never exactly maudlin or teary-eyed, just very bitter. Alone. Empty. Though the occasional series of chords might create a galloping grandeur, you'll find no real sense of warmth or comfort throughout. It's a straightforward indoctrination into the Hungarians' pain and psychosis. Effective for what it is, but I found a lot of the guitars derivative to the point that they had little to offer me. That aside, if you are one to associate black metal with black and white photography, decay, and a numbing, entropic consistency, you might want to check this out.