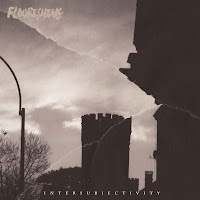 Having released what was one of my top records for 2011 in The Sum of All Fossils, I have naturally harbored some interest in what New York's post-hardcore/death mavens Flourishing would be shoveling from the angst and ether of daily life into their next recording. This has now manifest in a 3-track, 20 minute EP which further defines the more oppressive side of the band, coming both as a refreshing arbiter of consistency, but perhaps also a mild disappointment for one such as myself so embroiled in the delicious dichotomy of grace and savagery from the full-length. Not to say that this isn't still pretty sick and engrossing, or that the trio's creativity has undergone any substantial sense of distillation, but much of the material here is focused on the pounding, dissonant narratives that represented slightly over half of that debut.

Think The Sum of All Fossils if it were sent through a junkyard compactor and fused with all manner of filthy, industrial waste, and you've got a reasonable estimation of where the sounds of Intersubjectivity lie. The guitar patterns are largely built around massive, clamorous repetitions of chords which are flooded with the swill of repulsive, oozing bass lines. Once again, I find myself at odds with exactly how to accurately pin the band's influences. Treponem Pal meets Coalesce at a Zeni Geva gig? Voivod serenading Today is the Day by way of Godflesh? Half the Hydra Head roster fused through a fruit juicer? But I think much the beauty in the New Yorkers' style is how they manage to converge and contain such varied aesthetics into a bruising, ugly, corpulent release while retaining a strict level of artistry and self-identity. There are moments throughout this EP where I felt like they'd transformed into this novel industrial noise rock unit who have eschewed programmed beats and synthesizers who create an analogue of sense of urban decay (particularly in the opening volley to "A Living Sundial"), and this time out there's far less of the debut's unexpected warmth and humanity to balance out the Herculean pounding of the bass, the nauseating certainty of the riff torrents and the bloodied discomfort of Garrett Bussanick's vocals.

Of course, it's those same grisly growls which provide the trio's most apparent tether to the death metal genre that inspired them. The guitars will often bear a passing semblance to the chaos inherent in a Portal,  Ulcerate, or Gorguts' Obscura, but very little reminiscent of traditional death metal tremolo riffs or breakdowns that haven't at least been deconstructed into the music's abrasive, rusted turmoil. Highlights of the tunes often arrive when Bussanick emits his spurious leads and wailing disharmony, particularly in "The Petrifaction Lottery" or the titular, 8 minute closer. These aren't quite so catchy as some of the passages on The Sum of All Fossils, but when the chords disappear and you hear them ringing out over the floodlight bass barrage in "Intersubjectivity", you still get that same sense of suffering and alienation which hit at a deeper level than just the pounding of the rhythm guitars elsewhere. Brian Corcoran's drums were of particular interest here, shifting between callous, concrete weirdo blasts, fills and even a jazzier backdrop to the more spatial segues from the dominant, churning chassis of the compositions.

Be warned: Flourishing is so loud and raw here that you're apt to receive a headache competitive with staking a sharpened PVC pipe through one ear and out the other, then flushing your brain with bolts, nails and screws. All instruments are audible and dynamic, but there's plenty of feedback redolent of the angrier post-hardcore coming out of the late 90s, and to be honest this lends a certain authenticity to the natural entropy of the riffs. Madness and confusion are manifest, even legion, but there's never a sense that the New Yorkers aren't in complete control of the proceedings. It might not stack up to its predecessor in terms of how sticky the songs become, even after repeated listens, and it's probably best that they were contained here rather than on the ensuing full-length. That said, through, Flourishing and Intersubjectivity are still worthwhile for those in search of a distinct, unnerving darkness that functions through its own set of rules rather than adhering to any particular status quo of extremity. Nuanced, agonizing and unquestionably ambitious.