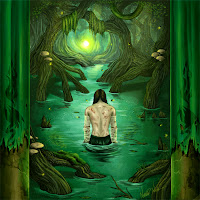 On first listen, Blessed He With Boils is quite a lot to take in, an album of enormous ambition and magnitude which spares no expense in either production qualities or musical complexity. Not that the Californians are composing very 'difficult' or inaccessible pieces here, but there can be no question that a great deal of time was spent penning, refining and laying down nearly an hour of epic/melodic black metal with some obvious progressive leanings that point to Scandinavian influences as broad as later Emperor, Winds, Arcturus, Opeth, even symphonic/tinged pagan extreme metal outfits like Wintersun or Ensiferum. Specifically, the soaring clean vocals and the atmospheric embellishments brought to mind the Borknagar material post-The Archaic Course, but there are some differences in how the riffs are constructed and Xanthochroid is certainly a more dynamic entity overall.

Rather than dive into preexisting mythologies or popular fantasy fare, they've conceptually spun the two from the imagination of vocalist/keyboardist Sam Meador, and built their own, fertile world from which to pluck lyrical inspiration. To the fantasist or escapist listener, this is immediately appealing, rather than revamping the tired ideology often expressed through black or pagan metal, but to be truthful, I was just far more impressed with the actual consistency and proficiency of the music itself. Gleaming and delicate acoustic guitars, sweeps of symphonic synthesizer elegance, and rolling tribal percussion are all delivered in a solid ratio to the more metallic components, which involve fits of melodic black/death tremolo picking sequences, airier bouts with atmospheric dissonance, and scads of variation in the tempos and eloquent note progressions which ensures that, despite the substantial amount of content, the album rarely feels dull or overlong. I'm not claiming that every single lick through the course of this disc is infinitely memorable, or that the individual ingredients feel unique unto themselves, but the combination thereof creates an exceptional landscape of possibilities through which to voyage far and wide.

The studio mix is a major factor, with a lot of clean, crisp sounding guitars that sustain their potency through the chords, mutes and speedier passages; all measured cautiously against the swerving, dreamy bass lines and the impeccable, professional pummeling of the drums. The vocals are arranged beautifully, whether pursuing the I.C.S. Vortex like wail in the cleaner inflection, the harsher Ihsahn rasps, dirtier guttural grunts, or even the layered choirs which give the uncanny effect of some heathen rock opera. The synthesizers use a lot of strings and pianos rather than spacier ambient effects, which is why it definitely nails that Norwegian comparison I hinted at earlier, but these are all handled tastefully. I did feel as if there were a few too many 'setup' sequences in terms of how phrases felt like intros (or outros), and the album might have withstood 5-10 minutes of trim, but then again these don't necessarily detract from its value if you're interested in a more thorough escape. I also wouldn't have minded a few stickier lead guitars in the depths of the longer tracks, but there's so much happening in a piece like "Long Live Our Lifeless King" or "Rebirth of an Old Nation" that you'll hardly notice.

In summation, this record is damn likely to blow a good number of people out of their chairs, and fans of melodic, majestic modern black metal ala Ne Obliviscarus, Cormorant or the past decade of Borknagar records would do well to keep their ears and eyes on this one.