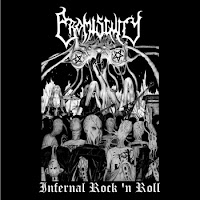 It doesn't take a staggering intellect to figure out what Promiscuity are all about: vicious, uncircumcised old school black/speed metal that looks much like what the undead crowd on the demo's cover would listen to at any given moment. I admit there's some novelty that the band hails from Israel, a land known more for an ethnic overtone to its artists' output, but aesthetically Infernal Rock 'n' Roll is far more a tribute to its British and European influences. Venom is an obvious comparison point, much like on Chapel's more recent debut Satan's Rock 'n' Roll, and aesthetically this demo is barking up the same tree, poised to force-feed its forbidden fruit to the unsuspecting masses; but Promiscuity have an unwashed, unrefined, raucous approach to writing that feels like crushing a beer can on an altar and then taking a piss on the nearest nativity scene.

As I was so drawn with Welcome to Hell, Black Metal, and the formative works of Hellhammer, Celtic Frost, Nunslaughter, Bulldozer, Piledriver and Possessed, so too do I find myself drawn to the style this band is selling. With just 3 tracks and 11 minutes of content, there's not a lot of 'fleshing out' or dynamic range, but more of a straight application of the listener's face to the pavement of Hell. The bass is meted out with a plunky, sparkplug certainty while the guitars are about as raw as you could conceive, so you're getting this very 'live' sensation as if you were listening to the Israelis in a small club where their blasphemy resonates out into the rafters. Drums are consistent with this crashing, clapping atmosphere and the vocals are just a wall of hoarse rasping diabolism that won't prove unfamiliar to anyone interesting in this hybrid of forms. Infernal Rock 'n' Roll was not the recipient of a large budget, and this sort of release isn't meant to be, so in terms of punishment and primacy, there's really no complaint with the music...

That said, where I found the material lacking is just in the dearth of really interesting riffs. Solid, remorseless walls of chords rock along with a damnable certainty, but even where they launch into a breakdown like the speed/thrash bridge of "Gybenhinnom", there's never that same sense of unforgettable texture to the note progressions like we all felt when we heard Venom's "Black Metal" or Bathory's "Necromansy". Chord selections are pretty standard fare for this corner of extremity, and thus the music becomes something appreciated only a pure, visceral level rather than the fare I'll be listening to relentlessly for decades. On just about every other level I connected with the demo and took no issue with its grimy delivery and purity of purpose, like the grisly vocals to "Crime and Punishment" which I thought were depraved and fantastic; but I think that, to arrive at that next level (and a lot of groups in this niche never do), the songs have to gestate into a more formidable and sticky coalition of evil decisions. This is some decent, sincere shit here, and the lyrics are fun, but a little more effort into how the songs are constructed and you'll have a sure contender that could heat up the roster of an imprint like Hell's Headbangers or Nuclear War Now.