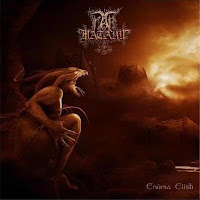 Nar Mattaru is a Chilean death metal act whose 2011 debut is seeing a reissue through I, Voidhanger Records, who have begun to specialize in atmospheric old school brutality in addition to the eclectic black metal stylings I have associated them with in the past. The resurgence of the 90s sounds that so many newer groups adhere to is strong within this record, and I'd be a liar to say I wasn't getting a little tired of the trend, with bands starting to clearly form into distinct tiers of quality as they do with any huge movement in the medium, but Nar Mattaru are far from the runt of the litter, and rather than obsess over the cavernous contours and dissonant chaos so many in their niche rely upon, Enuma Elish is more of a rotting, pestilent, root effort hearkening back to the gruesome 'innocence' of the genre than another clone of Autopsy or Incantation drowned in reverb.

The guitar tone is voluptuous and ruddy to the point that it really takes over the mix against the blunt and resonating guttural vocals, creating this overwhelming syrupy effect that I'm on the fence about, mainly since the actual note progressions are rarely all that interesting. That said, the tremolo sequences they ingrain with the endless blasting and double bass battering definitely possess a feel of antiquity that relates to the band's ancient occult and mythological themes. They use a lot of subtle background rasps and sneers to mix up the monotony of the central growl, which was so eerie I actually kept looking over my shoulder as if strange voices were in my apartment speaking to me. The drums are harried and constantly hammering away, but I wasn't really impressed with their mix, due to the snap of the snare and the fact that the fills once in a while get cluttered by that guitar tone. The bass actually gets a chance to really shine thanks to some speed picked passages that stand out against the riffing, so it's not your usual humdrum performance sticking directly to the guitars, and the album as a whole has a very subterranean feel to it thanks to the vocal and guitar tone.

Aside from the decent covers of "Twisted Mass of Burnt Decay" (Autopsy) and "Tirano Constrictor" (by a fellow Chilean band Kratherion) that land directly in the middle of all the originals (there's a third cover for Incantation's "Abolishment of Immaculate Serenity" closing out the album), I felt like the songs often drudged on for too long, most being 7-9 minutes. That's not to say Nar Mattaru lacks variation here, since they'll shift between leaden grooves, death/doom styled pauses and then back into blasted materials; but I just felt like there would be lengthy periods without any interesting riffing patterns. They do cover quite a lot of ground, but I felt like they never really excelled at any tempo, and thus was drawn more to all the backing atmospheric shouts more than the primary guitar progressions. Cranked to ample volume, Enuma Elish is sufficiently raucous and morbid that they never feel like hacks, but in terms of songwriting the album did not really stir me beyond its churning viscera. Decent stuff for fans of Severed Survival, Mortal Throne of Nazarene, Blessed Are the Sick, Ultimo Mondo Cannibale, early Cianide, or other bands in their scene like Trimestigo and Dominus Xul (who several of the members were involved with).