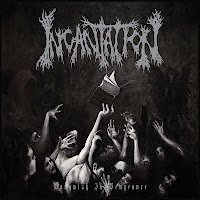 Incantation was a band that hit me early on, and hit me HARD early on, with a pair of albums so abysmally dark, dank, nihilist and unfriendly that they really challenged my perception of the possibilities in a budding genre that I had previously still held pretty closely to the tenets of thrash and speed based songwriting. The monstrous, outrageous guttural vocals were the sickest I'd heard since Van Drunen or Tardy. The emphasis on churning, subterranean atmosphere over the 'catchy' evil riffs inherent to many of the Floridian, Dutch or Swedish exports was a novelty I hadn't considered (one that has since been beaten to death by various waves of followers), but despite this fact, Onward to Golgotha and Mortal Throne of Nazarene remained quite distinct. My reactions to the later Incantation work in the 90s and beyond were lukewarm at best (Decimate Christendom being the disc I enjoyed most of these), because even though they've never released a 'bad' full-length (outside of the wasteful Upon the Throne of Apocalypse), for some reason I felt like they had lost some of that crushing primacy that translated into nuance during their formative years of existence.

So I'm pretty confident in claiming that Vanquish in Vengeance is the best album I've heard from the band in 18 years, but this boast comes with a caveat: it's not necessarily the same, murky, ominous Incantation that so many have foisted upon the pedestal of (un)godliness. Thanks largely to the production, this is a far brighter beast than I usually associate with the Pennsylvanians' output, even if the musical blueprint covers most of the same fundamentals. Vanquish in Vengeance is well written, old school death metal, that has, to its great credit, decided against shunning the benefits that come with a louder, more contemporary recording flush with the 21st century. To some degree, this naturally comes with an elevated sense of accessibility, not that you'll be hearing Incantation on the radio or booming out the loudspeakers at the shopping mall, but that its not got the ultra-muddied tones to compete with lauded underground juggernauts like Teitanblood or Portal. This is potent, dynamic, riff-centric death metal rooted in the virtues of the 90s, with an enormous sense of proper pacing throughout 52 minutes of occult and supernatural lyrical themes. In terms of the riffing structure, it's certainly not a far cry from many of the records they've released in the interim of their gory, glory days with Relapse, but a lot of the note progressions here really gelled with me.

Guitars have a firm, raw fiber to them that holds up through whatever tempo and configuration they choose, whether that be a lumbering, vile death/doom groove as in "The Hellions Genesis" and "Transcend the Absolute Dissolution", or the grainier, accelerated patterns that feel like someone tilling the soil in a moist, fog-shrouded cemetery with a gut-spattered iron rake. Harmonies are morbid, beefy and atonal, and leads sporadic and quivering like psychedelic banshees in conversation through the the deepening night. In contrast to what a lot of death metal bands select for their bass tones, these lines are pretty clean sounding (like the intro to "Profound Loathing"), and though the instrument is always playing second fiddle to McEntee and (newish guitarist) Alex Bouks, I like the dichotomy of solemn swells against the ghoulish grit of the guitars. Kyle Severn returns once again to the fold with a lurid and effective set of skills, and though Incantation are not necessarily known for unabated percussive intensity, he packs in some tight fills with effortless double bass and blasting techniques whenever called for. That said, I did feel like the drums, in addition to the bass, were often outweighed by the rhythm guitars.

Vanquish in Vengeance is the third full-length on which John McEntee performs the vocals, and even if he might not have that same, dreadful character that defined Craig Pillard in the early years, he's come unto his own with his sodden, opaque, mortuary growls, which I'd say hold up rather well up against either Disma's Towards the Megalith or Autopsy's Macabre Eternal, both of which this record altogether exceeds by my humble estimations. Again, the variation here is excellent, from the surging blood storm of intro "Invoked Infinity" to the wailing and wrenching crawl of the nearly 12 minute finale "Legion of Dis", there's never a point at which I felt like the quartet was fucking off and repeating itself needlessly. Apart from the fat, necrotic mass of its natural resonance, there was no cellulose here to be trimmed, and the lengthier numbers were imbued with enough mournful atmosphere that they really filled out their bulk. In a year already strong and saturated with classic death metal sounds from artists both new and old, Incantation has risen once more unto relevance, and even if it's not a perfectly memorable outing 100% of the time, this is bad ass enough to survive a large swath of re-listens. Impressive!