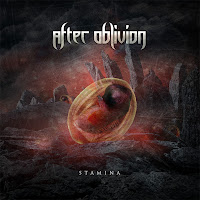 I don't get a lot of releases to cover from Bosnia and Herzegovina, so After Oblivion's debut is right there a personal novelty, not to mention evidence of a 'branching out' for Metal on Metal Records, who generally tend to specialize in speed, power and heavy/doom metal. By the sound of Stamina, it was a compelling, different sort of signing, since there just aren't a lot of bands out there performing this sort of 90s-based technical death/thrash with such precision. Don't get me wrong, despite their immense instrumental proficiency, After Oblivion (formerly Path Beyond Serenity) still have a few setbacks here, but there won't be much fixing necessary to turn this quartet into a world class, top shelf progressive death metal act.

For one, they've got a style highly redolent of Death on the Human album, which happens to not be my favorite of Chuck Schuldiner's efforts (though I'm aware I'm in a very small minority in saying that). Clinical and dextrous hyper-thrash riffs that keep themselves busy across a number of strings, there is clearly much effort placed into the construction of each of the nine tracks. Unlike Death, the guitar tone is a bit more crisp, clean, and understated; you won't hear that same level of processed effects. Another band that comes straight to mind is America's Vektor, especially on their Black Future album, due to the copious amounts of very involved riffs being dispensed upon the listener, and especially due to the heightened sneer of the vocals, which is essentially a mixture of Chuck Schuldiner and David DiSanto. Stamina isn't quite so atmospheric or space-based as the Arizonans, but they do implement a few brief, clean guitar sequences into the punching, pummeling matrix of crisp, mute-leaden technicality they evoke.

Drums are super clean, but also intensely busy, with a nice subdued power to the kick drum and an almost machine-like sense of balance and timing. The bass also rules here; like Atheist or Cynic, two other bands that After Oblivion obviously take some cues form, this guy's always flowing out his own lines that manage to complement the guitars without just cloning them. Definitely a bit of a fusion/jazz undercurrent to the tunes, thanks to this low end, but for the most part obscured by the oodles of momentous thrashing rhythms. The leads also deserve mention, because of their positioning in pieces like "The Carnal Form" or "For the Rebels" that lends them a striking quality (if not highly novel or memorable). Overall the production might be too straight and narrow for those who like a lot of reverb, saturation and density in their death metal, but geeks on the more technical side of the sphere who enjoy other bands of this ilk like Gory Blister or Illogicist will just devour this...

There were a few points where the vocals felt a bit too silly, especially on 'cuss' words, but if I had a single, primary issue against the album, it's that for all this band's array of individual talent, the songs seem to blend into one another too much. Tempo variations are present, but the vox and the guitar riffs almost feel like they could be interchanged at numerous points on the album, and there are few that have a lasting impact beyond just the sheer bewilderment at their inception. I kept finding that, as many times as I'd spin through this record, I had a hard time really remembering any tune in particular, even though I appreciated the volume of practiced precision they were meting out. So ultimately, I can't say I enjoyed this a great deal, since it needs more atmosphere and experimentation, or stickier individual riffs that draw my ear beyond just the percussive persistence. That said, though, if your tastes run towards anything I've mentioned previously, or others like Sadus, Sadist, Theory in Practice etc, give it a chance. This particular album might not have blown me out of my seat, but it's pretty clear that After Oblivion have no limitations to their potential once the songwriting rivals the skill set.