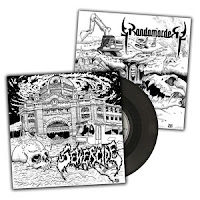 States of Decay is definitely one of the more attractive 7" releases I've been asked to cover lately, with its pure black & white artwork, good logos, and a bit of a unified theme what with the buried skulls on both sides, not to mention the comparable sounds performed by Melbourne's Sewercide and Tasmania's Randomorder. Pure, raucous, underground thrash metal here, taking all the appropriate queues from the 80s and doing their damnedest not to fuck with the tried and trued formulas of their forefathers. Succeeding, in fact, at not making the tired tropes of the genre sound stupid or dated like a lot of other groups who treat it solely like a keg party for popping pimples and comparing denim and patches. Both of these bands brand their contributions with anger, authenticity, and a puerile, punching production that bodes well for their respective futures. No, it's not the most unique sound out there (in either case), but if you're going to wear your influences on your sleeves, then by all means wear THESE.

Sewercide's track "Hypothermia" is like a bastard brawl between Hell Awaits/Reign in Blood era Slayer and Kreator's Pleasure to Kill: loud, rowdy, violent momentum dowsed in hostile vocals that draw from both Tom Araya's sense of lyrical pacing and Mille Petrozza's pronounced, bloody bark. Riffs veer between accelerated Slayer/Razor picking and moderate, mid-paced chug/off breakdowns, and the primal clarity of the drums (which are great, by the way), raw leadwork, and crunching tone of the rhythm guitars almost gives a harried live performance feel. As for Randomorder, they've got a slightly more pronounced and epic feel about them, not only in their track "Resurrection" being almost twice as long and possessive of a cleaner production palette, but how they balance out the melodies and rifling rhythm guitars. Once again I got a Germanic impression, with later 80s Kreator and Sodom in mind, but the tune is packed with everything from brief clean guitar breaks to and intense lead bridge backed by one of the best individual riffs on the 7". The vocals here are haughty and gravel-guzzling to the point they are almost guttural, but I enjoyed their level of resonance over the meatier subtext of the riffing.

Apart from the influences and (to some extent) the production of their music, I found both these acts to have this vibrant, enthusiastic atmosphere to their music that I don't often experience in dime a dozen retro thrash acts. The architecture of the riff progressions is nothing novel or particularly memorable, but they're easily on the right track to emulating the sounds I so loved through the 80s, and probably capable of a lot more once they've gotten some more experience under their collective bullet belts. Yeah, the logos and the music itself all scream 'retro' to a degree, and the vocals could stand to be a little more vicious, the guitars catchier and more creative, but States of Decay is nevertheless engaging and entertaining enough for most denim knights whose devotion lies stalwartly in the realms of both Bay Area and Teutonic speed and thrash metal, with a few hints of Demolition Hammer, Sepultura, Sacred Reich and so forth. Definitely a decent EP; the only drawback is of course the brevity (under 10 minutes total) which ultimately lends itself more to finger foods than a banquet of all these bands can muster.