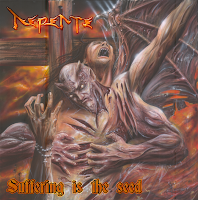 Colombia is a place I can only assume to possess some level of day to day oppression, that is, if the music I've encountered from the country is any indicator of its level of unrest. Brutal/death metal seems to be the primary flavor there, and on their sophomore effort, Suffering is the Seed, Nepente do not intend to challenge that perception, as this is a fairly straight burst of churning, nihilistic extremity that eschews all the principles of nuance and subtlety to bulldoze its audience from front to back. I had read that the band was a hybrid of death and black metal aesthetics, but what I'm hearing on this disc is far more in favor of the former camp. A few passages, like the intro to "Hear Me Howl" or "Die for Me", give the impression of tremolo/blast black metal (a little like Endstille in tone), and there are some rasped lyric lines, but the bombastic guttural vox and majority of riff structures have a truly South America death flavor.

My favorite component to the record was the guitar tone, which is fiery and rich without seeming inauthentic or unnecessarily processed, and it provides a real muscular crunch over the storm-like drumming that is constantly providing a cluttered momentum. The riffs definitely have a Morbid Angel feel to them, caustic and explosive and inherently apocalyptic due to their lack of warmth or brighter melodies, but I also found some notable similarities to other South American acts like Krisiun, Abhorrence, Nephasth and Mental Horror thanks to the ferocious structuring. The drums are insanely busy, with a lot of the fills popping through the headphones but a nice, exhilarated hellishness to the blast beats. Bass is potent, pummeling, and thick, though occasionally I had to strain a little to really appreciate what was happening there. As for the vocals, the rasps (where they appear) are your somewhat forgettable, average black metal ravings, but the primary growling is massive, forceful, and strafes alongside the guitars to provide one of the more dominant elements on the album. Gutturals with similarities to Steve Tucker, Erik Rutan, Alex Camargo or the various Nile frontmen add a layer of unforgiving opacity to the mood of the busier music.

Where I lost a little interest was in the actual riffing constructions, which just aren't all that compelling, even though they provide a variety of blasted tremolo riffs, melodic-oriented death circa Swedish bands like Dissection or Sacramentum, and harder hitting, muted frenzies. Throughout, there's this sense of a molten flow full of burnt out angel wings and halos, but it's running out to sea where it gets diluted by the lack of standout songs. If they could take this same sense of production and apply stronger songwriting, Nepente would probably make some ripples, but all too rarely did I derive a sense of excitement or catchiness from the individual patterns, and it was often somewhat of a chore to stay attentive. That said, there's nothing particularly bad or incompetent about Suffering is the Seed, and the band does a decent job of inserting a broad enough spectrum of aggression that I wouldn't deign the music monotonous by any stretch of the imagination. They've done their homework, and they can play. Might be worth checking out if you're into Malevolent Creation, Krisiun, Morbid Angel or Kataklysm, or Polish bands like Hate or Behemoth, but even then I just didn't get a lasting impression.