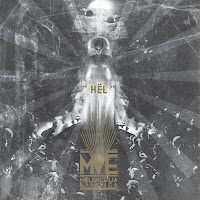 As curious an entrant as Melencolia Estatica had been to the realm of depressive black metal on the prior albums, I never felt as fully roped in or engrossed by them as others seem to have been. Grim, serviceable, introspective and even creepy, but the music never exactly dazzled me. Hel is the Italians' third full-length outing, and their most exotic to date, featuring both the group's downcast, signature melodies and a vortex of variation in the haunting, ethereal background vocals, floods of grotesque dissonance erupting through Melencolia/Climaxia's picking progressions and vocals that experiment with both hoarser death grunts and trailing, spectral, resonant cleans. Catchy or not, each of the six movements that comprise Hel feature plenty of distractions.

The guitars cycle through churning tremolo patterns redolent of more aggressive black metal, to airier cleans and melodies that are more common to moody, blackgaze variants. Often they're set to create an ambient trance unto themselves (like the intro to "Hel III"), and often they explode into psychotic, uncomfortable phrases and tectonic collisions over which the vocals taunt and echo. I was occasionally reminded of the Swedish group Lifelover in how individual lines flowed, but there are also traces of Burzum, Darkthrone and other classics who contributed to the definition of black metal riff construction, though Melencolia is more abrupt and atmospheric in how it translates and transitions its influences. The drums are barbaric and blasted adequately through the harsher passages, and the bass lines verve and curve across the bottom end of the recording with a resplendent discord not unlike Norway's Virus (though they're not as compelling or pronounced). Over this mesh, the varied barks, growls, and ethereal choir-like melodies of vocals crash into one another, like a primal palette of emotions being painted upon a grisly gray landscape.

The efficacy of Hel's equal ration of turmoil and dark grace is not always sufficient to the point where the music becomes truly mesmerizing, and I actually wish there were more ambient/orchestral breaks like the extensive outro to "Hel IV" in place of some of the less interesting riff content; but it's nonetheless a more spellbinding effort than its predecessors, and a galleria of whispered madness that is well suited to a nighttime experience in which you don't mind someone's gloved fingers probing the cobwebs of your sanity. The music is suitably disturbing, visceral and not always comfortable, but the very concept of light and melody are not lost upon Climaxia's compositional style. It reaches as deeply into its personal void as other landmark acts of the 21st century (Xasthur, Leviathan, etc), but there's enough of a traditional black metal backbone here to maintain some composure, and I feel like many will be impressed by the schizophrenic performance of the vocalist Afthenktos who might damn well be the next Attila Csihar. The roman numeral song titles (which were also used on the previous discs) don't exactly evoke much distinction, so this album is best approached when you've got 40+ minutes to fully revel in its dramatic atrocities.