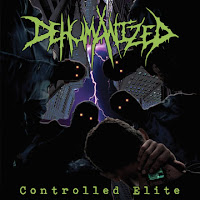 Despite having only one full-length to their credit prior to this one, New York's Dehumanized was a band that generated considerable buzz with its 1998 debut Prophecies Foretold. In particular, a lot of folks here in New England were partial to their thuggish, street level tier of brutality which was quite something else from their fellow statesmen like the over the top, morbid horror inherent to Mortician, or the occult dissonance that drove Immolation. These guys were more along the lines of other New York groups Internal Bleeding, Suffocation and Skinless, or Maryland's Dying Fetus, in how they meted out muscular, hardcore influenced breakdowns to contrast the meticulous, uptempo riffing progressions that were more prevalent in the evolution of 90s death metal.

I can't claim I was the biggest fan of their first album, finding it somewhat underwhelming despite all the hype it was flying on, but I don't think there's any question that Dehumanized know how to put their material together, and regardless of the 14-year gap, Controlled Elite sounds like an album for which no expense was spared, and no amount of effort left by the wayside. In terms of construction, the material is very well balanced to engage both the loping, pit oriented swagger and those who desire something faster and more intricate. You can feel the imprints of both death/thrash and hardcore influences wrought into the mid to late 90s brutal death mainframe, and there is little to no attempt at broaching the walls of callous technicality or experimentation. Controlled Elite isn't even remotely trendy in the genre's current environs, but more of a reaffirmation of the band's identity placed into the context of cleaner, modern production than what was capable their first time out. While I don't enjoy every riff flying off the fretboard, there were plenty of clinical grooves and Napalm Death-like bursts of acceleration here that held my attention through a largely concise set of tunes, most of which hang around 2-3 minutes as to never wear out their welcome.

This is pretty clean sounding, so if you're seeking ominous atmosphere and loads of dissonance in your death metal, Dehumanized is probably not the bloodiest of pastures on which you should graze. The guitars have a nice, firm punch to them during the muted moments, but the chords are also fairly robust and balanced. In particular, the title track stood out for a number of the meat-headed breakdowns that are certainly capable of evoking faux-violence in the live setting. There's a different vocalist here than on the debut, but Michael Centrone does a fairly apt job at implementing percussive variation to his concrete grunt which never exudes the monotony I often feel on a lot of polished, modern brutal death efforts. In addition, these are often paired with snarls to create the good old Deicide dichotomy of wretchedness and revulsion. George Torres' beats provide a dynamic and consistent foundation for the guitars; even at their most minimal stride, he'll pop in a fill or two that keep things entertaining. The bass on the album tends to follow the riffing pattern a bit much for my taste, but it's got a full enough tone that lends some leverage to the bass drum and toms.

The presence of the breakdowns definitely keeps Controlled Elite in line with that urban sensibility that I felt so pervasively on the debut album. Sure, many death and thrash metal bands use them without hesitation, but in the New Yorkers' case, I feel they're pretty well attuned to the needs of their audience. In other words, Dehumanized is the sort of death metal that will have a cross appeal to both the hardcore/metalcore element and the stricter metal fan. But to their credit, it never really feels like a cheap, arbitrary pandering to engage its audience, even if I can't say I enjoy all of the actual mosh rhythms as much as the better defined, surgical streaks of  incendiary harmony in the tremolo sequences. The taut leads were solid, but nothing remarkable, and the songs ultimately were not the sort that are likely to have me revisiting the record in the long run (like, for instance, Cannibal Corpse's Bloodthirst or Decapitated's Winds of Creation), but this is a competent and well crafted return to form with an innate appeal for fans of early 90s Napalm Death, Suffocation's Pierced from Within, Pyrexia, Malevolent Creation or the latest from Coldworker.