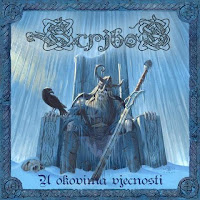 Pagan/black or folk/black metal is not something I cover often enough here, a situation I'll one day hope to rectify, because I'm constantly being surprised at how well that scene in general has progressed from its rustic roots. Where once I found a lot of production flaws and inconsistency in the strength of the 'metal' element to such acts, recent years have seen a wealth of better riff material to balance off against the acoustic guitars, female guest vocals, flutes, and other ingredients often incorporated to the formula. Stribog is a pretty good example of how Europe has become a hotbed for this aesthetic, as they've got most of the strengths and none of the weaknesses associated with this niche. U Okovima Vječnosti, their first (and thus far) only full-length, might seem a little 'garden variety' in execution, but its damn solid and has a lot to offer whether your tastes run towards an Arkona, Nokturnal Mortum, Finntroll or Temnozor.

First, there is the presence of these intense and justifiably blaring female vocals which sound superb wherever they manifest through the track list. Somewhere between Arkona and Dalriada in delivery, but never without a sequence of notes that carve out your brain and make you wish you were somewhere else, somewhere ancient, beholden to nature as beautiful as this woman's inflection. These are often meted out into a sensual whisper ("Morana") or joined to a more ominous male tone, but without a doubt they provide an intrinsic, vibrant energy through the debut that is essential to its success. Otherwise, you've got an amalgam of blackened/thrash metal with a lot of bone crushing force to the lower-end muted progression, and then a more wide open vista of glaring, atmospheric melody that is usually affixed to the female vocals. As for the male parts, it's a petulant, carnal black rasp, not so unique in of itself but effectively loud and raucous. The bass thunders along with a clear traditional heavy metal influence circa Iron Maiden, while the drums, if rarely interesting, give the riffing that added discharge of momentum.

As with many such albums, you'll experience periods of calm that both rise and fall from the faster, hostile movements, but U Okovima Vječnosti is up to the task of keeping it all in line. Flutes, ringing piano keys, waves, synths, and brooding, glorious backing choirs are all spliced into the mix to create the larger-than-life atmospheres, and you'll never pass a moment without some sort of ear candy carrying you off to a distant land. Lyrics paint paeans to the band's Slavic forebears and the majesty of nature, but a few of the tunes ("Follow the Silver Path", "Remember With Pride") are also in English. They wear their inspiration on their sleeves a bit much, but nothing too corny. Perhaps my least favorite part of the album would be the guitar progressions; as lively, appropriate and energized as they tend to be, the structure of the riffs very often just seems a vehicle for the atmospheric flourishes, a smattering of power, black and thrash metal sequences which are all similar to those we've heard before. But fortunately, they're not alone here, and all the elements in unison do create a grand, fun and at times memorable experience. Worth a spin if you're into the folksy bands I named earlier, the recent Skyforger material or Switzerland's Eluveitie.